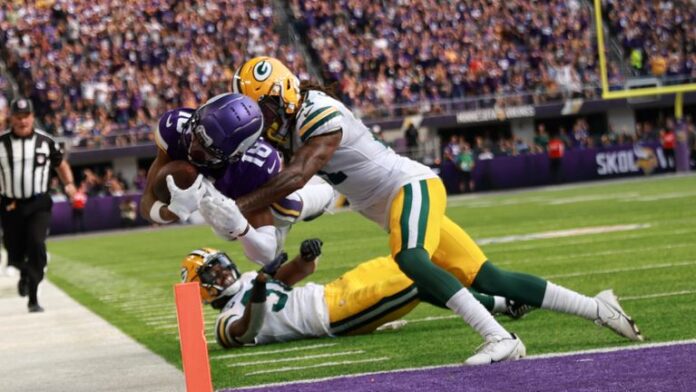 Philadelphia Eagles star AJ Brown says Minnesota Vikings’ Justin Jefferson is a ‘top three receiver’ in the NFL; watch Vikings @ Eagles as part of a Monday Night Football double-header live on Sky Sports NFL, with kick-off at 1.30am in the early hours of Tuesday morning

Justin Jefferson could have been a Philadelphia Eagles player. Instead, he walks into Lincoln Financial Field on Monday night as talisman to the Minnesota Vikings and the most talked-about wide receiver in the NFL.

“Best player on the field today”, praised Aaron Rodgers; “Wore us out today,” conceded Matt LaFleur; “You didn’t have to do us like that”, pleaded Aaron Jones. Jefferson resumed his rampage in Week One when he made nine catches for 184 yards and two touchdowns, including an all-time team record of 158 first-half yards, to inspire the Vikings to a famous 23-7 win over their divisional rival Green Bay Packers.

In his regular season curtain-raiser, first-year head coach Kevin O’Connell announced himself and his offensive pizazz with focal point treatment of Jefferson as he hovered between the outside, the slot, the backfield and tight end on a torrid outing for Jaire Alexander and the entire Packers secondary.

No player in NFL history has more receiving yards in his first two seasons than Jefferson (3,016), who now looms as the next test of a deep and talented Eagles roster teasing Championship contention.

“I’ve been watching tape of Justin Jefferson since he’s been in the league, it’s not just now,” said Eagles cornerback Darius Slay.

There is the famous video from the 2020 NFL Draft when then-Vikings head coach Mike Zimmer and then-Vikings general manager Rick Spielman afford a smile as they watch the Eagles select Jalen Reagor with the 21st overall pick, paving the way for them to nab Jefferson at 22nd overall.

As fate would have it, Reagor was traded to the Vikings this offseason after struggling to make an impact during his two campaigns in Philly. In contrast, the man selected one spot behind him arrives with the Monday night lights shining in his direction.

“That’s when I like to have the best game, to showcase to the world what I have, and my argument is being the best receiver,” Jefferson said.

“Every mock draft had me going to Philly, so when Philly was on the board, getting a phone call and it being Minnesota, it was definitely a shocker. But I’m definitely happy, way more happy, to be here than there.”

Eagles head coach Nick Sirianni recalled sitting down to watch Jefferson as part of the star-studded LSU side, led by Joe Burrow, that beat Trevor Lawrence’s Clemson to cap a perfect season in the 2020 College National Championship Game.

“That week leading up to that, I watched (Joe) Burrow, Justin (Jefferson), (Ja’Marr) Chase, all those guys.

“I’m watching the game, he catches the ball and puts his foot in the ground really quick and it zooms in, and it was like ‘okay, he’s exactly what I thought, he does have all that quickness’. I’ve always admired his game, he poses a lot of problems. He’s a great football player.”

Speaking to reporters during the build-up, Eagles wideout AJ Brown hailed Jefferson as a “top three receiver” in the NFL while backing his defense to stand up to the challenge.

The Eagles come armed with their own dynamism on the outside, led by offseason addition Brown as he looks to build on his 10 catches for 155 yards against the Detroit Lions in Week One.

“Very good after the catch, he’s a receiver you definitely have to be on your P’s and Q’s every single down. He’s a guy that can take it the distance, any given time when the ball is in his hands.

“We know we have our work cut out. We have to make sure we eliminate those big plays, get off the field on third down and be very stout in the red zone.”

Watch the Vikings at the Eagles live as part of an MNF double-header on Sky Sports NFL from 1.30am in the early hours of Tuesday.