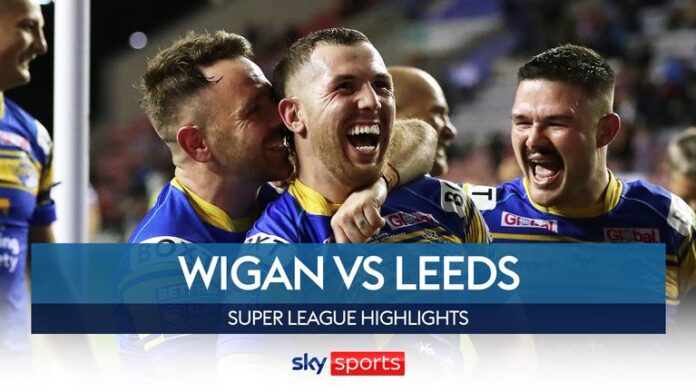 Departing Rhinos centre Sutcliffe looks ahead to his final appearance for the club in Saturday’s Betfred Super League Grand Final; watch this year’s Grand Final between Leeds and St Helens on Sky Sports Arena and Main Event from 5pm on Saturday (6pm kick-off)

There are few people better placed than Liam Sutcliffe to assess the ups and downs experienced at Leeds Rhinos since one of the Betfred Super League’s most successful clubs last lifted the title.

The 27-year-old is one of only three players still part of the squad from the matchday 17 which beat Castleford Tigers 24-6 at Old Trafford five years ago in a triumph which would ultimately prove the last hurrah of the Rhinos’ golden era.

The intervening seasons have been turbulent though, Leeds often finding themselves fighting it out at the wrong end of the Super League table, albeit with a Challenge Cup success in the Covid-affected 2020 campaign and a run to the play-off semi-finals in 2021 punctuating those struggles.

In mid-April this year, it seemed as if it would be another struggle as the Rhinos found themselves in the relegation mire. Yet the arrival of Rohan Smith as head coach the following month has brought about a turnaround which now sees them just 80 minutes away from a ninth Super League title after reaching the Grand Final against all expectations.

“There has been all sorts going on in the past five years, going from the high of 2017 and winning the Grand Final to what was to come in the years after,” Sutcliffe said, reflecting on what has come and gone since that night at Old Trafford in 2017.

“We were bottom of the league, then managed to win a Challenge Cup and were down at the bottom at the league at the start of this year again.

“It’s been a bit crazy in the past few years, but it’s something you look back on and even though they are tough times they can probably build you to times like this coming up this week.”

Aside from the mid-season arrival of former player Zak Hardaker from Wigan Warriors, beaten opponents in last Friday’s semi-final, it is a near-unchanged squad from the start of the season.

Even then, Leeds have been shorn of key players due to injuries and suspensions at times throughout the year, and concussion protocols will deprive them of star half-back Aidan Sezer for Saturday’s Grand Final showdown with reigning champions St Helens.

Suctliffe believes the 20-8 win away to Challenge Cup winners and Super League second-place finishers Wigan to book a place at Old Trafford, coming on the back of a gritty 20-10 win over Catalans Dragons in which he was named player of the match after bagging a hat-trick of tries, is a further sign of the ability within the squad which Smith has been able to harness.

“The players are pretty much the same from the start of the season barring Zak coming in,” Sutcliffe said. “Obviously it was there in some capacity, it was just getting it out of us.

It’s been a bit crazy in the past few years, but it’s something you look back on and even though they are tough times they can probably build you to times like this coming up this week.

“Rohan has managed to come in and get it out of players, he’s allowed people to express themselves and you’re really seeing the benefits of allowing people to do that.”

As with five years ago, Leeds head to the Grand Final knowing this will be the last time several of the current squad pull on the blue and amber shirt.

Sutcliffe and Tom Briscoe, another member of the class of 2017, are among them, as is Brad Dwyer. The future of the other remaining 2017 Grand Final winner – Jack Walker, who spent part of this year on loan at Hull FC, where Sutcliffe will play from next season Hull FC – remains uncertain too.

“It will be emotional for a few boys, but I’m sure they’ll be just wanting to enjoy the week as well.

“I just want to enjoy the week as much as possible, take everything in, enjoy my time around the place, and try to take it all in on Saturday as well.”

That 2017 Grand Final success is most remembered for Rhinos greats Danny McGuire and Rob Burrow signing off their time playing for the club on a high, with McGuire earning the Harry Sunderland Trophy for player of the match after an indomitable display that night.

Sutcliffe has tried not to ponder too much on what it would feel like to achieve that with Leeds before he moves onto the next chapter of his career. Instead, all he wants to focus on is ensuring the Super League trophy is brought back to his home city.

“It would be hard to put into words – I don’t know whether I’d be crying with happiness or sadness,” Sutcliffe said. “It would be a dream to get a send-off with a ring and things like that.

“I’ve not thought about it too much and don’t want to get overwhelmed too early in the week, but whatever happens Saturday happens.

“Hopefully we can end the same way the likes of Rob and Danny finished on – that would be a dream come true to finish that way.

“That’s what I’ll be hoping for this week, but as long as we put in a decent performance on Saturday the result will take care of itself.”