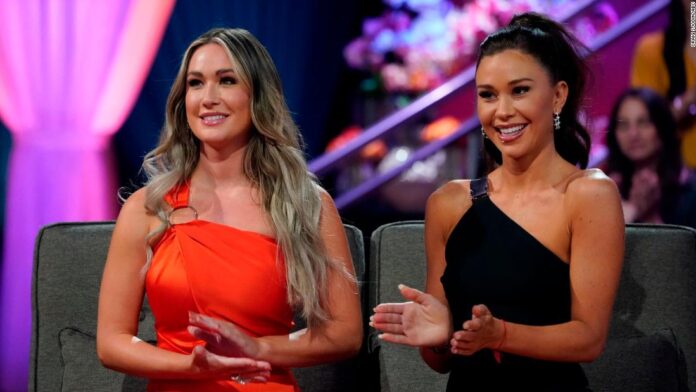 At the start of the finale, both women had a final suitor. Recchia was left with Tino Franco while Windey was with Erich Schwer, who seemed hesitant to propose to her.
Recchia was prepared to get engaged but revealed during the live part of the show that she and Tino had been having problems and that Tino had kissed another woman during their relationship. He explained that he had met the woman before filming and that they had kissed after running into each other at a bar.
After he accused Recchia of refusing to go to therapy, the two battled over the ring. “Is there a way this works out?” he asked before walking away.
He returned only to walk off again.
The two fought until host Jesse Palmer told Recchia that someone “demanded a chance to talk to you,” bringing runner-up Aven Jones on stage. Recchia ended up leaving with him.
Meanwhile, Erich proposed to Windey, and was later confident in his decision.
After being confronted by Palmer about rumors of going on the show for work opportunities, he called himself a coward for his behavior but said his love for Windey was real.
Palmer later introduced Recchia’s second runner-up Zach Shallcross as next season’s “Bachelor.” Voters awarded the first impression rose over Twitter, which went to a woman named Brianna, so she automatically makes it through week one in the mansion.