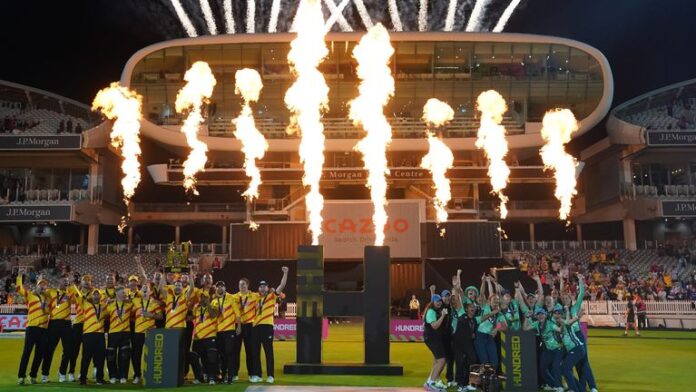 Audi became Sky Sports’ first-ever innovation partner this year and kickstarted their collaboration with the introduction of the Power Meter as a feature to the second season of The Hundred. The goal is to carry further innovation projects across to other sports within Sky’s offering.

The game of cricket can pride itself on the elegance of a beautifully-guided cover drive, the precision and moxie of a ramp shot, the field perception of a reverse sweep. And sometimes, cricket lives for highlight-reel brawn at the crease.

Ever wondered which players strike the ball the hardest? Sky Sports partnered with Audi this summer to answer that question with the introduction of the Power Meter for the second season of The Hundred.

It set the tone for Sky and Audi’s ambition to implement further innovation across multiple sports within the channel’s offering, from golf to rugby league and beyond.

“Audi and Sky are two partners that have innovation at the heart of what they do,” said Tony Moore, Audi’s Head of Marketing. “Vorsprung durch Technik is more than a strapline, we live progress in all we do.

“It’s a real innovation for cricket and a real first for the sport, it features in both the men’s and women’s game. Audi looks for leaders in their respective field and in Sky we know we have a partner that strives for excellence, professionalism, inclusivity and integrity.

“We’ve got big plans with Sky to create thought-provoking content that demonstrates the strength of our brand. This a great platform for us to be able to do that.”

The Hundred represents cricket’s biggest innovation in recent times, thereby presenting itself as a perfect platform on which to showcase the exciting potential of Sky and Audi’s collaboration.

“Audi is a very attractive brand for us to work with,” said Jason Landau, Creative Director at Sky Sports. “They talked to us about their values and drive for innovation and what it meant for them. It’s such an exciting start for us to be doing this with the Power Meter.”

The Power Meter utilises Hawkeye data to measure the biggest shots in both the men and women’s competition, pitting the Liam Livingstones and Will Jacks of the world against one another while highlighting the talents of the Lizelle Lees and Nat Scivers.

“We get asked a lot, who hits the ball the hardest? It’s a very difficult thing to quantify, it’s speed off the bat, launch angle, because if you hit it 90 degrees straight up that’s not what you want from the game of cricket, you want it about 45 degrees, and also distance,” said former England captain Nasser Hussain.

The Power Meter saw five additional Hawkeye cameras spread around grounds in order to accurately track the path of the ball from the bat to its end point.

Hawkeye data rated both the speed and distance of shots out of 50 before producing a combined score out of 100, with data bars visible on screen to animate each value.

“They measure speed off the bat, launch angles, and then they come up with a rating,” said Bryan Henderson, Director of Cricket for Sky Sports. “If Liam Livingstone for example hits a six 120m, smashes it out the park, then that’s going to get a rating of about 96, something like that.

At the heart of The Hundred’s introduction and early success has been its gender-inclusive appeal to young and new audiences in addition to long-time cricket fans.

This season saw families make up 41 per cent of ticket sales in a rise from 36 per cent in 2021, while 271,000 people attended the women’s tournament in a global record for a women’s cricket competition, the ECB announced.

The Power Meter marks another injection of innovation to combine with unique on-screen graphics, the high-octane brand of cricket demanded by the competition’s short format and both the regularity and accessibility of games in furthering that cause.

“When you see the Power Meter it explains the angles of where the ball meets the bat, it also tells you the bat speed which is so important. I think it’s a brilliant concept ideal for The Hundred.”

Where bowlers have long been able to cite their pace, the Power Meter has shed more detailed light on a batter’s specific traits. More information, more insight and, ultimately, more fun.

“We’re grateful for Audi getting on board with this, to have some help in terms of funding and putting investment into innovation is incredibly powerful,” added Henderson, Director of Cricket for Sky Sports.

“I’m really fortunate to be running Sky Cricket and one of the things I challenge myself to do is get something better every year.

“It’s really important to have new stories to tell.”

The Power Meter is just the beginning.