Home World Young Iranians are rising up against decades of repression — arguably bolder... 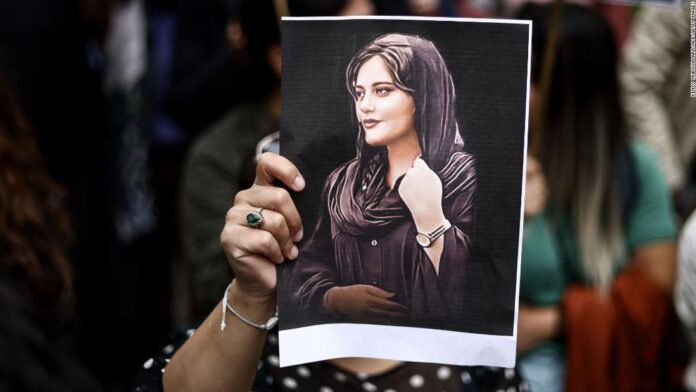 Thousands of Iranians have taken to the streets in protest since the death last week of 22-year-old Mahsa Amini, who was apprehended in Tehran and taken to a “re-education center,” apparently for not wearing her hijab properly.
Since Friday, demonstrations have taken place in at least 40 cities nationwide, including the capital Tehran, with protesters demanding an end to violence and discrimination against women as well as an end to compulsory wearing of the hijab.
Dozens of protesters have reportedly been killed in the resulting clashes with security forces.
CNN cannot independently verify the death toll —  a precise figure is impossible for anyone outside the Iranian government to confirm — and different estimates have been given by opposition groups, international rights organizations and local journalists. Amnesty International said Friday that at least 30 people, including four children, had died; according to state media the Islamic Republic of Iran Broadcasting, 35 people have died.

Authorities hope that by restricting the internet they can control the protests — the latest in a wave that has swept Iran in recent years. They started with the Green movement in 2009 over contested election results and more recently the 2019 protests sparked by a rise in fuel prices. Hundreds were believed to have been killed in the violent crackdown three years ago and thousands injured, according to estimates released by the UN and rights groups.
But this year’s protests are different — in their scope, scale and unprecedented feminist nature. There is also mobilization across the socio-economic divide. A young generation of Iranians are rising up on the streets against decades of repression — arguably bolder than ever.
The demonstrations have spread to dozens of Iranian cities, from the Kurdish region in the northwest, to the capital Tehran and even more traditionally conservative cities like Mashhad.
While they were ignited by the death of Amini — the initial calls for accountability have turned into demands for more rights and freedoms, especially for women who for decades since the 1979 Islamic Revolution have faced discrimination and severe restrictions on their rights.
But calls for regime change are growing too. People across the country are chanting for “death to the dictator,” in a reference to the Supreme Leader, tearing down portraits of Ayatollah Ali Khamenei. Remarkable images emerged on Friday night from Khamenei’s birthplace in the city of Mashhad, where protesters set fire to the statue of a man considered one of the symbols of the Islamic Revolution. Such scenes were unthinkable in the past.
This is all happening at a time when Iran’s hardline leadership is under growing pressure with talks to revive the stalled 2015 nuclear agreement and the state of the economy under US sanctions; ordinary Iranians are struggling to cope with soaring levels of inflation.
While these protests are the biggest challenge for the government for years, analysts believe the government will likely move to contain them by resorting to the heavy-handed tactics it has used in the past. There are signs a brutal crackdown is coming, along with the internet restrictions on a level not seen since 2019. Other measures include the government mobilizing its supporters in mass rallies following Friday prayers; officials dismissing the demonstrators as rioters and foreign agents, and ominous warnings the army and powerful Iranian Revolutionary Guard Corps will be deployed to deal with the protests.
Speaking with state broadcaster IRIB on Friday, Iran’s Minister of Communications Ahmad Vahidi said, “Until the riots end, the internet will have limitations. To prevent riot organization through social media, we are obliged to create internet limitations.”
Vahidi’s comments came after videos on social media showed scenes of public defiance, with women removing and burning their headscarves and demonstrators chanting such slogans as, “women, life, freedom.”
The move to further restrict the internet also followed a call by the United Nations for an independent investigation into Amini’s death and for Iran’s security forces to refrain from using “disproportionate force” on the protesters.
Outrage over Amini’s death comes from public skepticism over the account given by state officials, who claim she died after suffering a “heart attack” and fell into a coma. But Amini’s family have said she had no pre-existing heart condition.
Amini’s death has now become a symbol of the violent oppression women have faced in Iran for decades, and her name has spread around the globe, with world leaders invoking her even at the United Nations General Assembly in New York City this week.
The United Nations High Commissioner for Human Rights on Thursday said UN experts strongly condemned the use of physical violence against women in Iran by state authorities.
“Iranian authorities said (Amini) died of a heart attack, and claimed her death was from natural causes. However, some reports suggested that Amini’s death was a result of alleged torture and ill-treatment,” it said in a statement.
“We call on the Iranian authorities to hold an independent, impartial, and prompt investigation into Ms Amini’s death, make the findings of the investigation public and hold all perpetrators accountable,” it added.

The internet monitoring agency Netblocks said Friday Iranians are facing a third wave of “nation-scale” loss of mobile internet connectivity as the protests continue.
The watchdog group said earlier in the week that Iran was experiencing the most severe internet restrictions since 2019, with mobile networks largely shutdown and social networks Instagram and WhatsApp restricted in the country since protests began.
To circumvent internet blocks, Iranians both inside the country and in the diaspora are turning to popular Virtual Private Network (VPN) providers such as Tor Project and Hula VPN — the top downloaded apps available in Iran via Google Play Store, a marketplace for Android smartphone users to download apps, according to monitoring service AppBrain.
However, Netblocks has warned that the kind of internet disruption seen currently in the country “cannot generally be worked around with the use of circumvention software or VPNs.”
Similar internet restrictions took place in Iran in November 2019, taking Iranians almost entirely offline as authorities tried to curb the spread of nationwide protests over fuel prices.
Oracle’s Internet Intelligence called it at the time the “largest internet shutdown ever observed in Iran.”
Meanwhile, Internet activist hacker group Anonymous has also targeted the Iranian government online over the past week, announcing several breaches of government websites on Thursday.
Using the hashtag #OpIran, short for Operation Iran, which started gaining traction on social media following the death of Amini, Anonymous also tweeted Thursday that the organization was successful in hacking more than 1,000 CCTV Iranian cameras — a claim CNN has not been able to independently confirm.

UN Secretary General António Guterres said Friday he was “concerned about reports of peaceful protests being met with excessive use of force leading to dozens of deaths and injuries.”
“We call on the security forces to refrain from using unnecessary or disproportionate force and appeal to all to exercise restraint to avoid further escalation,” Dujarric said at the daily briefing on UNTV.
The UN said it’s closely following the protests in Iran and called on authorities to “respect the right to freedoms of expression, peaceful assembly and association.”
“We also call on the authorities to respect women’s rights and to eliminate all forms of discrimination against women and girls and implement effective measures to protect them from other human rights violations, in accordance with international standards.”
Guterres reiterated a call from the Acting High Commissioner for Human Rights for a prompt investigation into the death of Amini by an “independent competent authority.”