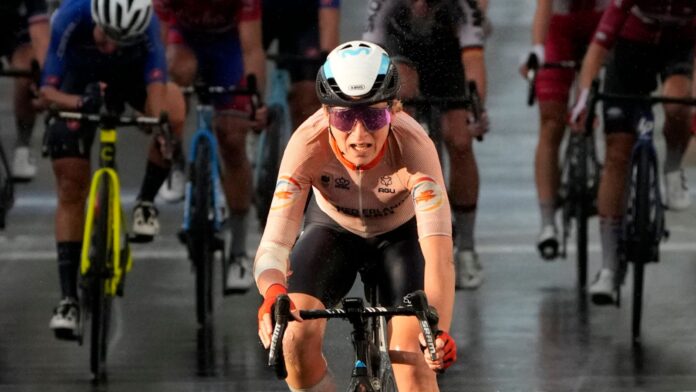 The Dutchwoman won the 164.3km race at the UCI Road World Championships on Saturday despite riding with a fractured elbow throughout; she suffered the injury on Wednesday during the the mixed relay

Annemiek van Vleuten won the Elite Women’s Road Race at the UCI Road World Championships despite cycling with a fractured elbow throughout.

Van Vleuten staged a classic late attack, putting aside the pain, to win the 164.3km race and claim the rainbow jersey for the second time in her career.

The 39-year-old was a major doubt for the race after sustaining the injury in a crash in the mixed relay on Wednesday.

Van Vleuten had been buried in the peloton for most of the race but came out of nowhere to sweep to the front as the sprinters were jockeying for position on the other side of the road about 500 metres from the finish line.

Belgian Lotte Kopecky finished second with Italian Silvia Persico third, both cursing themselves after being completely outmanoeuvred by their Dutch rival.

Van Vleuten clocked four hours, 24 minutes and 25 seconds over a course that ran along the Pacific coast from Helensburgh to Wollongong on Australia’s eastern seaboard south of Sydney.

“I had such a different plan before I broke my elbow and now I win it in the last kilometre and I’m world champion.”

Van Vleuten’s triumph brings the title back to the Netherlands for the fifth time in six years after the reign of Italian Elisa Balsamo, who dropped out of the running with about 25 km to go just after rain started falling on the course.

New Zealander Niamh Fisher-Black finished 12th in the bunch, a second behind van Vleuten, to take the inaugural women’s under-23 title.

Earlier, Britain’s Zoe Backstedt celebrated her 18th birthday by defending her junior road race world title with another dominant performance, adding a second Wollongong gold medal to the one she won in the junior time trial on Tuesday.

The men’s road race concludes the championships on Sunday.