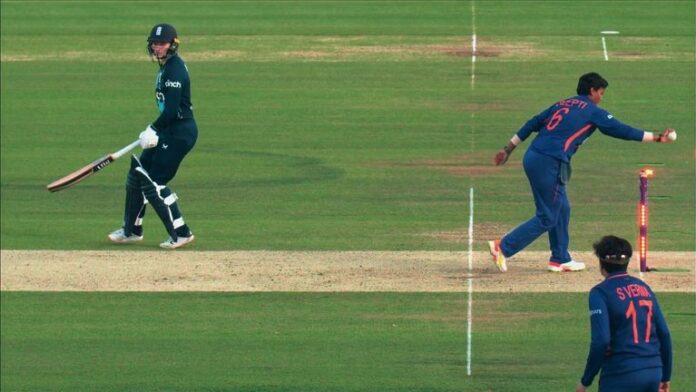 Charlie Dean and Freya Davies guided England to the brink of an unlikely ODI victory with their last-wicket stand of 35 before Dean was controversially run out by Deepti Sharma at Lord’s; India’s 16-run win sealed a 3-0 series victory

India completed a series sweep over England in controversial circumstances after Charlie Dean was ‘Mankaded’ for the last wicket in the final one-day international at Lord’s.

England, chasing 170, needed just 17 runs to win after Dean (47) and Freya Davies (10no) produced a valiant last-wicket partnership of 35 that was brought to an end when Deepti Sharma (1-24) ran out non-striker Dean.

The dismissal – named after India bowler Vinoo Mankad, who ran out Australia’s Bill Brown in 1947 – is seen by many as against the spirit of the game but, as Sharma was in her delivery stride when she turned to take off the bails as Dean walked down the crease, it was a legal move.

Boos rang out at Lord’s while Dean was left in tears after the ending, which wrapped up a 3-0 series win for the tourists.

What are the rules about Mankading?

“I will back my players,” said India captain Harmanpreet Kaur. “She has not done anything which is against the rules.”

India, in superb form with the bat through the series, were bowled out by 169 after being put in by the hosts, with Kate Cross (4-26) starring with the ball as only Deepti Sharma (68no) and Smriti Mandhana (50) put up any real resistance.

But on a pitch which produced movement for both seamers and spinners, India ripped through England’s inexperienced batting line-up as Renuka Singh Thakur (4-29) wreaked havoc with the new ball, ably backed up by Jhulan Goswami (2-30) in the legendary bowler’s last-ever game.

Goswami, the leading wicket taker in ODI cricket, was given a guard of honour when she came out to bat and bowl, and aptly got a wicket in her final over.

But Dean and Davies put England in touching distance before the contentious ending.

Mankading is when a bowler runs out the non-striking batter in their delivery stride if that batter is backing up.

The MCC only recently set out new laws about Mankading where they stated it was no longer an unfair dismissal.

But former England cricketer Lydia Greenway said on Sky Sports: “It doesn’t feel like the right way to win a game.

“They [India] are allowed to do it, they’re well within their right to get a wicket that way, but I would disagree with the way that it was managed.

“If I was captain of that team [India], I would say let’s give them a warning, and make sure that Charlie Dean is aware of what she’s doing.

“As youngsters growing up playing the game you’re taught to back up and, when you watch Charlie was backing up, she was just focused on happening at the other end. I don’t think she was trying to gain an unfair advantage, she was just simply focusing on what was in hand.

“What I would have liked to see was a warning if I was Indian captain, and I’d have been disappointed if England had done the same.

“The spirit of cricket is a really precious thing and arguably it isn’t that prominent in many other sports. It has to be looked after and protected and sometimes, when you get a rule book out, you just know whether something sits right with you or not.

“Regardless of whether it is in the rules or not, it just doesn’t sit comfortably with me at all.”

Dominic Cork added: “It’s in the laws and that needs to be sent around the world – that is allowed, and we’ve seen it enough times before.

“Unfortunately, Charlie Dean is in tears. It his her fault, she has her left her ground. Maybe I’m old fashioned and I’m in the past, but me as a cricketer wouldn’t like to finish a game of cricket like that.

“If somebody beats you, they beat you. Give them a warning and say ‘if that happens again, that was your first and last warning’. That’s the way I would do it and I thought it was bubbling it up to be a great game.

“I don’t like it. I would say exactly the same if Dean did this and Sharma was batting. It doesn’t sit comfortably with me.”

The match started so well for England after winning the toss and choosing to bowl.

Cross was in fine form early on, bowling Shafali Verma and Yastika Bhatia through the gate for ducks in back-to-back overs.

She didn’t have to wait long for her third wicket as she trapped Harmanpreet Kaur (4) lbw, with the dangerous India captain unable to replicate her century heroics from the previous match.

A fourth wicket in the powerplay came via Freya Davies – the one change for the match from either side – as she dismissed Harleen Deol (3), with England captain Amy Jones successfully reviewing despite Davies’ lack of interest.

Mandhana and Sharma get India back in it

England took their foot off the gas somewhat when removing the seamers from the attack, and Mandhana and Sharma put on 58 before Cross’ return brought a crucial wicket in the most bizarre circumstances.

Mandhana tried to pull a short and wide one but toed it onto her own stumps.

Dayalan Hemalatha (2) was then dismissed by Sophie Ecclestone – thanks to a superb diving catch from Dean – before Pooja Vastrakar’s quickfire 22 was ended with an lbw to another off-spinner in Charlie Dean.

Goswami was given a guard of honour as she arrived with the bat but was bowled first ball by Kemp for a duck, with the 17-year-old England bowler also getting Thakur out, caught by Dunkley, without troubling the scorecard.

But Sharma continued to impress and hog the strike, and with Cross unable to secure her five-for, 18 more runs put on before Gayakwad (0) was out lbw by Ecclestone.

India were all out with 26 balls still remaining in the innings. It looked like England’s game to lose.

England got off to a steady start with Tammy Beaumont and Emma Lamb putting on 27 for the first wicket, but their innings started to crumble after Lamb (21) was superbly stumped by Yastika after dancing down the track to Thakur.

Thakur was the more dangerous of the two brilliant Indian fast bowlers and she bowled Beamont (8) with a beauty that angle in and then nipped away, and Dunkley (7) with one that nipped in between the gate.

In between those wickets, Goswami was given a gift in her last match as the in-form England teenager Alice Capsey (5) chipped a cut shot straight to Deol.

England would have hoped to kick on – as India did – upon the spinners coming into the attack, but Gayakwad bowled Wyatt (8) in her first over, and then Ecclestone (0) soon after – with Goswami taking a neat low catch at slip.

England were left 65-7 – more than 100 short of the target – when Kemp (5) sliced Sharma to Deol, who also ended England’s best partnership of the innings by catching Jones out in the deep.

Goswami got a wicket in her very last over (Cross, 10) but Dean and Davies batted superbly, rotating strike and looking comfortable before the match reached boiling point.

Debate will rumble on over whether Dean was really angling for a single by marching down the crease, or if she was simply so focused on the delivery itself. Either way, Sharma’s move, while controversial, was within the rules.