Home Sport India defend ‘Mankad’ finish to ODI | Was wicket within spirit of... 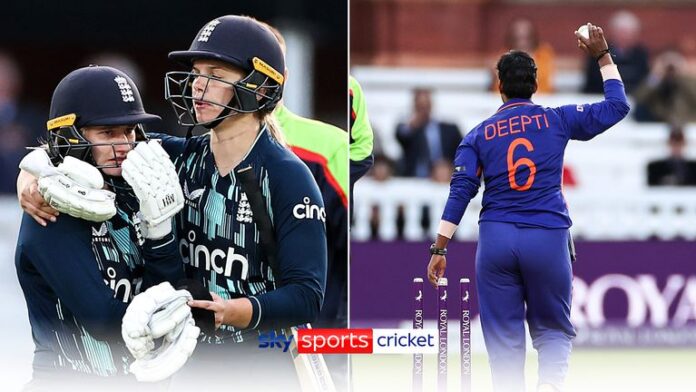 The rare form of dismissal has been re-categorised as a legitimate run-out by the International Cricket Council, but the manner by which India secured victory for a clean sweep of the three-match series has divided opinion within the sport.

India’s decision to run out Charlie Dean at the non-striker’s end secured victory in the last one-day international of the summer at Lord’s, but was the dismissal within the spirit of the game?

Dean was run out at the non-striker’s end just as England looked to be closing in on an unlikely victory, having looked comfortable at the crease on 47 before Deepti Sharma took the bails off after entering her delivery stride.

The Mankad dismissal was upheld by the third umpire and sealed a 16-run win and 3-0 series sweep for India, with Dean throwing her bat to the ground in tears as boos rang out from the crowd at the manner of the victory.

There has previously been an unwritten convention to offer the batter a warning, though the relevant law was recently moved by the International Cricket Council from the ‘Unfair play’ section and filed instead under ‘Run out’.

England captain Amy Jones admitted she wasn’t impressed with the way the game finished, although India’s Harmanpreet Kaur defended the decision-making of her teammates.

“Obviously not happy with the result,” Jones said. “The last dismissal obviously divides opinion. I’m not a fan, but it depends how India feel about that I guess.

“It’s within the rules, so a disappointing end I think and hopefully it doesn’t take the shine off a good summer and a good series in the end.”

In contrast, Kaur – the player of the series – said: “It’s part of the game. I don’t think we’ve done something new, it’s ICC rules and you can always take those chances. What I feel is that I think that shows your awareness and you’re aware of what batters are doing.

“I will back my players, because I don’t think she has done something which is not in ICC rules. I think it’s part of the game and at the end of the day, a win is a win and you just need to enjoy it.”

“Doesn’t feel the right way to win a game”

The MCC Law 41.16.1 states: “If the non-striker is out of his/her ground at any time from the moment the ball comes into play until the instant when the bowler would normally have been expected to release the ball, the non-striker is liable to be Run out.

“In these circumstances, the non-striker will be out Run out if he/she is out of his/her ground when his/her wicket is put down by the bowler throwing the ball at the stumps or by the bowler’s hand holding the ball, whether or not the ball is subsequently delivered.”

Former England international Lydia Greenway questioned the method to seal victory, telling Sky Sports: “It doesn’t feel like the right way to win a game. They [India] are allowed to do it, they’re well within their right to get a wicket that way, but I would disagree with the way that it was managed.

“If I was captain of that team [India], I would say let’s give them a warning, and make sure that Charlie Dean is aware of what she’s doing. As youngsters growing up playing the game you’re taught to back up and Charlie Dean was backing up, she was just focused on what was happening at the other end.

“The spirit of cricket is a really precious thing and arguably it isn’t that prominent in many other sports. It has to be looked after and protected and sometimes, when you get a rule book out, you just know whether something sits right with you or not. Regardless of whether it is in the rules or not, it just doesn’t sit comfortably with me at all.”

England international Sam Billings also felt uncomfortable with the dismissal, tweeting: “There’s surely not a person who has played the game that thinks this is acceptable? Just not cricket.

“Well within the laws but not in the spirit. Just my opinion, the law should be changed back to a warning system or penalty runs for excessive backing-up for example. Safe to say a few people disagree”.

England bowler Stuart Broad said: “I find the debate of the Mankad really interesting. So many views from either side. I personally wouldn’t like to win a match like that, also, very happy for others to feel differently.”

Former England all-rounder Dominic Cork added: “Maybe I’m old-fashioned and I’m in the past, but as a cricketer I wouldn’t like to finish a game of cricket like that. It’s nothing to do with India or any other team – if England finished off a game in that way, I would say exactly the same.

“It’s not with me. I wouldn’t like it as a player and I wouldn’t have liked it at Derbyshire when I was coach there, so let’s just forget anything about England bias, it’s nothing to do with that. It’s just the fact that I don’t like it.”