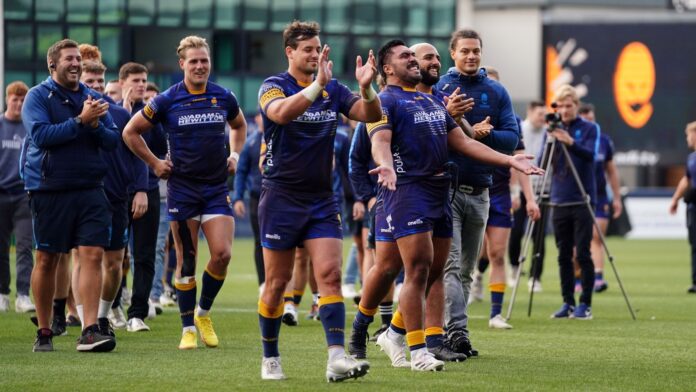 Worcester Warriors director of rugby Steve Diamond revealed his players held a vote on Friday over whether to go ahead with Saturday’s match against Newcastle Falcons.

The Sixways club face being suspended from all competitions on Monday unless they can convince the Rugby Football Union they have a credible financial plan to continue.

It comes after weeks of turmoil surrounding an unpaid £6m debt to HM Revenue and Customs that is expected to force them into administration, with Worcester burdened by debts totalling more than £25m.

Fly-half Billy Searle added the rest of Worcester’s points with the boot.

“I gave them the option not to play because it is a big risk if we are going into suspension on Monday, but they said to a man that their loyalty to the club made them determined to play,” Diamond said.

“The staff here are all volunteering because they are not getting paid and that shows we have a really passionate workforce who care about their jobs and who care about Worcester.

“That is what I would be looking at if I was an investor.”

Pat Lam declared himself “happy but not satisfied” after his Bristol team moved top of the Gallagher Premiership.

Bristol’s 40-36 victory over London Irish at Ashton Gate made it the first time since 1999 that they have won their first three games of a Premiership season.

But they were made to work hard for it in an 11-try thriller as Irish twice went close to wiping out 16-point deficits.

“We got off to a poor start at 10-0 down, but we took a commanding lead by half-time,” Bristol rugby director Lam said.

“We scored good tries, and we said that was the solution for the second half, but we brought them (Irish) back into the game.

“As I keep saying every week, five points are on offer, and round one and round three at home we’ve picked up maximum points, but we are still not humming on all four cylinders at the moment.

“There are some good things in there, but it is a mental game too and I would say we weren’t on it as much as we were in the (opening) Bath game.

“I am happy but not satisfied, although five points is what we got, which is the most important thing.”

Farrell needed to land both conversions from similar positions five metres in from the touchline to secure the win and the England fly-half duly delivered, with the second dropping between the posts in the final act of the game.

“I’m not sure we’d rather have anyone else kicking. He’s done it time and time again,” Saracens director of rugby McCall said.

“He lives for those moments. Having that competitive spirit on the field at that stage of the match is exactly what you want.”

Saints started strongly. Tries from Alex Mitchell and Tommy Freeman in the opening 20 minutes gave them an early advantage, though there were just four points in it at half-time after Freddie Steward’s score.

A third Saints try of the afternoon from Alex Coles restored their 11-point lead, but Guy Porter responded quickly for Tigers and the hosts began to struggle.

The hosts were comfortably the best side for the first 50 minutes but Northampton’s Phil Dowson believes pressure from their opponents led to mistakes and yellow cards for Mitchell, Emmanuel Iyogun and Juarno Augustus.

“When you put a side under pressure, they’ll give penalties away and if you give enough penalties away, you get yellow cards,” he said.