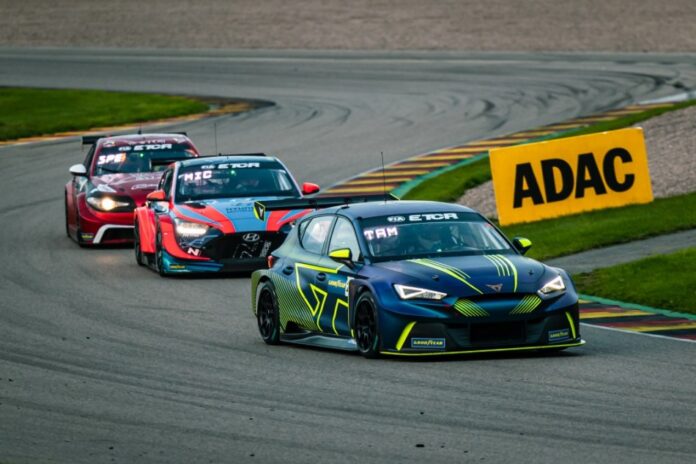 The season-finale of the FIA ETCR eTouring Car World Cup, Race DE at Sachsenring, started off in epic fashion on Saturday with thrills and spills at the rollercoaster circuit with as many highs and lows off track as well as on.

Saturday started with four drivers in the mix for title glory, with CUPRA EKS duo Adrien Tambay and  Mattias Ekström leading the way from Hyundai Motorsport N’s Mikel Azcona and Romeo Ferraris driver Maxime Martin. By the end of the day, there were two; Tambay, seemingly having a perfect weekend even despite relinquishing his Pool FURIOUS Quarter Final lead for but a moment, and Ekström 22 points behind after finishing second in his Quarter Final.

Of the other two hitherto contenders, Azcona was penalised post qualifying for a tyre protruding beyond his car’s bodywork contrary to the technical regulations and long-shot Martin was also penalised for a robust pass on Jean-Karl Vernay’s Hyundai Motorsport N car. There are now insufficient points available for either to take the title tomorrow.

Read up on all today’s action below:

Tambay takes a step closer with FURIOUS FIA ETCR Quarter Final win; Azcona fights back
CUPRA EKS driver Adrien Tambay took a step closer to taking the first-ever FIA ETCR eTouring Car World Cup title with a win in the first Pool FURIOUS Quarter Final where the Frenchman dominated for 98% of the time, even if Hyundai Motorsport N’s Norbert Michelisz stalked his prey in epic fashion on the last lap to take the lead at the start of the final corner, only to lose it moments later as Tambay crossed the line just ahead.