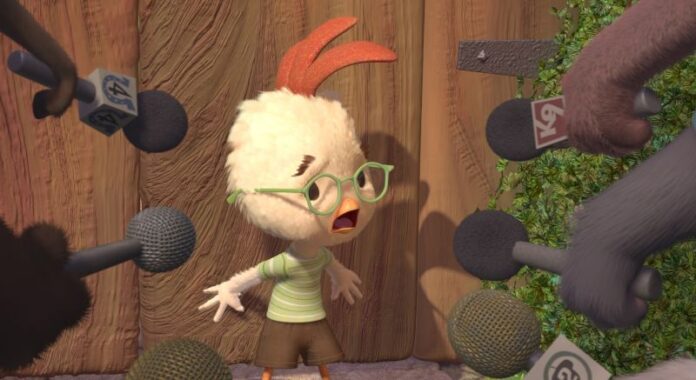 Sign up for CNN’s Wonder Theory science newsletter. Explore the universe with news on fascinating discoveries, scientific advancements and more.

There’s a giant rock ahead.

This is not a movie. Or a drill.

But don’t worry. Apparently, we’ve got this. Or at least NASA does.

On Monday, the Double Asteroid Redirection Test, or DART, spacecraft is supposed to collide with Dimorphos, a small “moon” orbiting the near-Earth asteroid Didymos. NASA’s big idea here is to see whether using such unmanned hardware to nudge incoming space debris out of harm’s way is going to protect Earth in the future.

It’s admirable but somehow feels a little deflating after decades of what I call “Chicken Little” movies, where humankind is threatened from above by cosmic clutter that can’t be reasoned away except through drastic means.

You know the routine. Somebody finds unmistakable evidence of a) an asteroid, b) a meteor, c) a comet, d) a rogue moon or e) a whole planet closing in on us. Who believes these warnings? Exactly nobody, until the skies are riddled with speeding debris sliding and shooting off the looming object. Then we either a) panic, b) submit or c) fly some of our own humans up there to save us all.

Take the most recent example of this subgenre, “Don’t Look Up.” Released last year in theaters and on Netflix, writer-director Adam McKay’s unruly political satire is set off by two Michigan State University astronomers (Jennifer Lawrence and Leonardo DiCaprio) who discover a comet that seems to have popped out of nowhere and within six months will collide with our planet hard enough to extinguish all life.

Their findings initially set off incredulity and even ridicule from the government and media. But once the inevitability sets in, the world in general and the United States specifically engage the crisis the way they seem to engage in everything else in the 21st century: narcissism, denial and blame of all the wrong people. It’s enough to make you think the world as we know it already ended before it does.

Looming apocalypse has always been a workable metaphor for our seemingly inescapable folly. (Paging “Dr. Strangelove”?) But we weren’t always so cynical about facing natural disasters from space. As recently as the turn of this century, we were so solemn and single-mindedly gung ho about our capabilities to engage perils from above that it was sometimes, well, laughable.

In 1998, multiplexes had not one, but two big, fat “Chicken Little” blockbusters: Michael Bay’s “Armageddon” and Mimi Leder’s “Deep Impact.”

The former, whose threat was a Texas-size asteroid, was a crowded, bombastic action thriller, rippling with broad humor and even broader set pieces with barely enough time for audience members to catch their breath.

The latter movie, whose threat was, as with “Don’t Look Up,” a comet, was a more earnest, conscientiously assembled and far less flustered variation on this theme.

Both did well at the box office, though Bey’s bombastic epic earned about $554 million, while Leder’s more ruminative thrill ride picked up roughly $350 million, according to the website Box Office Mojo.

“Armageddon” deals with the danger by setting up a couple of space shuttles (remember them?) crewed by crack oil-drilling teams, the crack-iest of whom is Bruce Willis, neck-deep in John Wayne mode, as Harry Stamper. His motley support comes from, among others, Billy Bob Thornton (by far the coolest cat in the room as a NASA exec), Steve Buscemi, Will Patton, Michael Clarke Duncan, William Fichtner, Peter Stormare (uproarious as the only guy left on a Russian space station), Ben Affleck (who’s been dating Willis’ daughter to dad’s violent displeasure) and Liv Tyler (the daughter).

The complications and idiosyncrasies of these and other characters swirl around long enough to take our minds off watching parts of Manhattan and all of Paris being leveled by pieces of the asteroid.

“Deep Impact’s” central character is an investigative TV reporter (Téa Leoni), who thinks she’s caught a Cabinet member in a sex scandal but finds out that the US President (Morgan Freeman, of course) is about to announce that the aforementioned comet is on a yearlong collision course with Earth. They try everything, including a space shuttle commanded by Robert Duvall loaded with nukes, to deflect the comet’s trajectory.

So, in which version of impending extinction do we get to go on with our lives? That would spoil things for those who haven’t seen either movie. All we feel safe in disclosing is that the science in “Deep Impact” is far more reliable and trustworthy than in “Armageddon.” Or for that matter in “Don’t Look Up.” Draw your own conclusions from that.

By the way, I bet you’re wondering whether a feature-length “Chicken Little” movie was ever made. There sure was, a digitally animated film released in 2005 by Disney (sans Pixar). This version starts with the title character getting plonked on the head by what he thinks is a piece of the sky. After panic sets in all around, the “piece of the sky” is identified as an acorn, making Chicken Little a laughingstock for months until he finds unexpected redemption by another, more ominous falling piece of an alien spaceship. All I’ll say here is that it sounds a lot more interesting than the movie turned out to be.

If the real-life DART succeeds in its mission, we may be able to chill out more when asteroids start coming too close. But that doesn’t necessarily mean the movies will altogether abandon “Chicken Little” themes.

After all, the reason why the original “The sky is falling!” phrase got passed down from generation to generation is that at some point the story turns on whether we earthlings believe or, worse, care that disaster may be imminent.

Gene Seymour is a critic who has written about music, movies and culture for The New York Times, Newsday, Entertainment Weekly and The Washington Post. Follow him on Twitter @GeneSeymour.