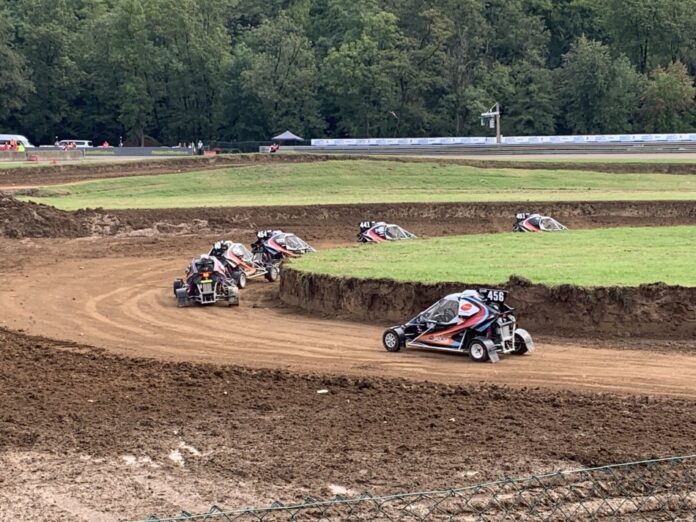 Valentino Ledda muscled his way to victory in his home event at Maggiora, the penultimate round of the 2022 FIA Cross Car Academy Trophy. By beating points leader Miguel Gayoso Vazquez into second place, the Sardinian keeps his hopes alive to the final round after a day of high drama.

Having held the first heat of the weekend on Saturday evening, the grid of nine identical LifeLive TN5 cross car buggies lined up in their finishing order for the second heat early on Sunday morning with Gayoso Vazquez on pole ahead of Belgian youngster Romauld Demelenne and Ledda on the front row.

At the first corner, however, Ledda dived inside the other front row qualifiers, with Gayoso Vazquez on the outside being forced into the deeper mud which cost him momentum and places. The Spaniard and Demelenne were both passed by the third driver who arrived in Maggiora with a shot at the title, Stanislav Brousek, who would go on to finish second ahead of Demelenne.

This result demoted Gayoso Vazquez to the second row of the grid for the final heat, but then a jump start for pole position man Ledda earned him a 5 second penalty. Gayoso Vazquez made it through to take victory as a result, having survived a robust defence from Brousek, which earned the Czech driver a warning from the FIA race director for his trouble.

Despite losing his heat, Ledda held on to a place on the front row of the grid for the final. Between him and Gayoso Vazquez, however, was Belgian youngster Emilien Allart, crowning easily his most competitive weekend of the season with second place in the final heat, having also qualified on the front row for Saturday’s opening encounter.

When the grid took off at the start of the final, Ledda once again held the inside line into the first corner and then stretched out a huge lead as the battle between Allart and Gayoso Vazquez saw them swallowed up by the chasing pack. The championship leader plummeted to fifth behind Brousek while Allart was passed by fellow countryman Demelenne.

Allart was undeterred however and was nipping at Demelenne’s heels through every corner. He made a big lunge as the pair turned into the twisty infield section but Demelenne shut the door firmly, leaving Allart with nowhere to go and he was launched into a barrel-roll that brought out the red flag.

Although his race was over, Allart stepped out of the inverted machine uninjured and soon the race was restarted with eight cars remaining on the grid. This time Vazquez Gayoso got the better getaway and pulled in front of Ledda with the rest of the field trailing in their wake.

It was a big, bold move that was deemed hard but fair by the FIA stewards as the two cars briefly made contact but carried on racing. After the race, Gayoso Vazquez was pleased to be heading to the final round on his home soil at Mollerussa in Spain with the points lead intact.

“I’m still championship leader, it was a very good race,” he said. “With rain coming after the restart it was difficult conditions but it went better for me than the first race before the red flag, when I was sixth or fifth with Valentino and Stanislav ahead of me. On the restart I was able to lead right until the very last laps, and I still go to Mollerussa with the championship lead.”

Just 10 points now separate Gayoso Vazquez from Ledda, with third-placed Brousek a further five points behind. All three youngsters now head to Barcelona in two weeks’ time for the final round, although both Ledda and Brousek are keenly aware of the value of the home ground advantage enjoyed by their Spanish rival.

The latest news and information from the 2022 FIA Cross Car Academy can be found here: https://www.fia.com/events/european-autocross-championship/season-2022/classifications