Home Music New Artist Spotlight: The Interesting Mélange of Styles and Philosophies that is... 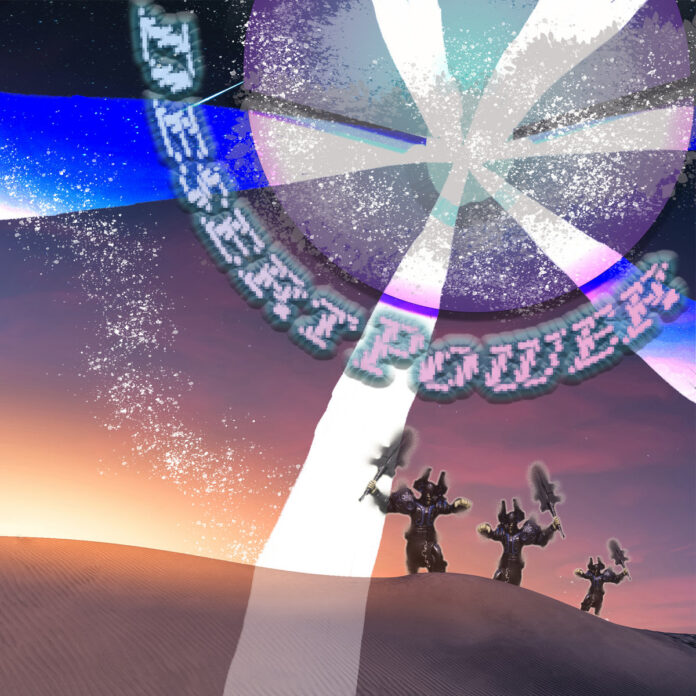 We talk a lot in the electronic music sect about style-hopping and the artists who do it; it’s a common occurrence for, say, a D&B producer to try their hand at techno or a dubstep artist to dip a toe into bass house. It’s all just different tempos and levels of syncopation at the end of the day, isn’t it? Music culture is also no stranger to the odd EDM/pop or EDM/hip hop crossover. Experimental electronic artists reach a little farther into jazz, classical and other fringe genres, but they’re alway still identifyably experimental. British Columbia-based artists jRadx isn’t even that, really.

With hip hop beats leading to vapor wave synths, breaks that hang in air, robot sounds making up song structures and industrial loops paired rap (and that’s just two tracks), jRadx’s latest album Desert Power is a tough one to unpack, but in the best possible way. Like one of those creepy photos where your mind turns over and over trying to make sense of the random parts and it never quite fits, there’s a twisted beauty to jRadx’s work. Because it’s such a patchwork, he may be the first artis to truly pull off being completely devoid of genre by way of using all the genres.

Don’t get us wrong: jRadx’s work, despite being musically dadaist, is very listenable. Even danceable. He began learning about music and production while studying communications at Simon Fraser University in BC. Media and its current place in society (or the fact that is almost is society nowadays) is one of the things that inspires jRadx both philosophically and musically. His earliest, pre-self-produced works, dubbed on his SoundCloud as the “Early Tapes” are spoken word-style social commentary raps over existing beats.

While in Desert Power it’s difficult to discern jRadx’s core influence, these early raps and his subsequent productions are obviously inspired by hip hop. His first three albums, released all within a four-month period last year, have a slightly stronger core in hip hop that most listeners will be able to track. Final Boss has a load of Wu Tang-like beats and kung fu sampling while Bedlam in the Basement sees a stretch into more EDM territory with industrial beats, fewer vocals and lots of experimental sound design. Phongcore starts to show jRadx’s need to play with different sounds and genres but by doing so it lands squarely in the experimental electronica category and is not quite the genreless, glorious mess that is Desert Power.

We’ve been dancing around it for 400 words, but it’s time now to get into said glorious mess. Desert Power is seminal for jRadx for a number of reasons, the most of which is that it’s the first cohesive discovery of what his style is and can be all in one place. The previos three albums were written over a long period of time while jRadx found that style, and now it’s on display for people to listen to, feel and scratch their heads over. And, of course, for critics to try (and fail) to pick apart and categorize.

From the peaceful “Intro” to the mock-industrial “Maybe” to the Hudson Mohawke/Daft Punk hybrid that is “AAAAAAA” to the tribal/folk-inspired “Digital Music Therapy” to the most structured dance track on the album ironically called “Freeform,” Desert Power is every style and no style all at once, making it simply jRadx’s style, tied together only with the passion and emotion of his creative play. There’s a track on this album that fans of every genre will love, and also one that will make thos same fans very nervous. That’s what makes it good art, and that’s what makes it truly genreless.

Since Desert Power, jRadx has already released a track called “Megatron” which is loosely Goa-inspired, an experimental/industrial hybrid track called “Optimus Prime,” a sort of lazy-beated (not trap) hip hop track that hearkens back to his old spoken word work and a drum & bass track titled (for now) “Unknown” whose beat is made up entirely of beatboxing. How can we track that style-wise? We can’t, and that’s the point.

jRadx is a study in, and possibly the answer to what happens when an artist is completely self-and-internnet-taught, does exactly what they want and is both not influenced by any trend and influenced by everything. There’s no way to predict where he’ll go next, and honeslty no one can really hold him to a genre. In that way he’s truly a free artist. You can’t hold an artist to a genre is there is no genre, and with Desert Power and all his past and future works, jRadx is a good reminder that we shouldn’t have done that in the first place.

Desert Power and jRadx’s other albums can be streamed on Bandcamp and Spotify but it seems the most up-to-date source of his mad scientist vibes is still SoundCloud. Check out his YouTube channel for more chaotic neutral vibes in A/V form.