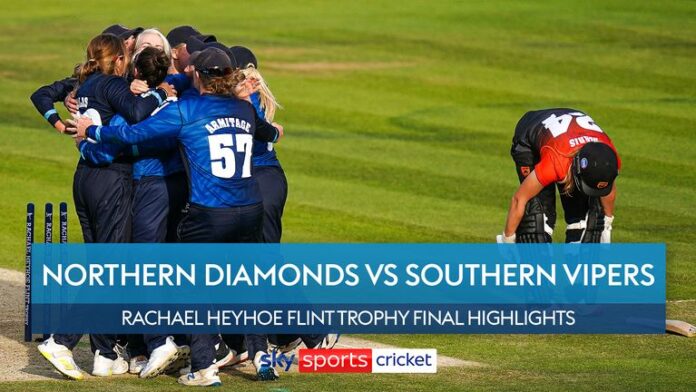 Northern Diamonds win their first Rachael Heyhoe Flint Trophy, edging out Southern Vipers by two runs; Diamonds had lost to Vipers twice before in finals but dethroned them at the third attempt

After losing to Vipers, the reigning champions, twice before in finals, Diamonds dethroned them this year at the third attempt.

In an exciting finish Diamonds won by two runs to secure their first title.

They scored 215 for nine wickets, with their top scorer Lauren Winfield-Hill making 65 runs off 87 balls.

Her opening stand of 87 with Linsey Smith, who hit 27 overall herself, provided the team’s foundation with Bess Heath and Leah Dobson further down the order scoring 44 and 34 respectively.

“To be able to turn it around, fall in love with the game again and take pressure off myself has been the most enjoyable bit. I’ve loved every game and it’s reflected in the way I’ve performed,” said Winfield-Hill afterwards.

“We’ve come close against the Vipers a few times now and we’ve got a few wounds against them.