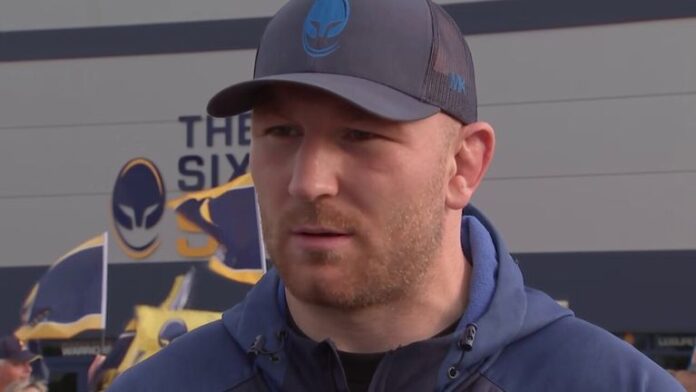 The Warriors were given a deadline of 5pm on Monday to evidence insurance cover, availability of funds to meet the monthly payroll, and a credible plan to take the club forward; Worcester player Matt Kvesic opened up to Sky Sports News on how he and his team-mates have been affected

Worcester Warriors have gone into administration after being suspended from all competitions by the Rugby Football Union, having missed the deadline to show plans were in place to move forward from the financial crisis enveloping it.

Worcester were suspended by the RFU on Monday for failing to meet a 5pm deadline to provide the governing body with evidence that they possessed the required insurance, were able to meet payroll and have a “credible plan to take the club forward”.

This was followed by an announcement from the Department for Digital, Culture, Media and Sport (DCMS) that it would apply to the court to appoint administrators, with Worcester subsequently confirming to Sky Sports News they have entered administration.

“We are grateful to DCMS and Sport England as the Covid-19 loan Programme Manager for accepting our request to place the club into administration,” club owners Colin Goldring and Jason Whittingham said in a statement confirming WRFC Trading Limited, the company which owns the Warriors, had entered administration.

“Both the club and DCMS will continue to co-ordinate efforts to find a rescue for the club if there is any possibility of it being saved.

“The administrators will assess any rescue options for some or all of the business as and when offers are made, while ensuring public funds are protected.”

The Gallagher Premiership club have been burdened by debts totalling more than £25m, including at least £6m in unpaid tax, amid growing anger felt towards Goldring and Whittingham.

Worcester are set to be automatically relegated from the Premiership for entering administration. However, the RFU has the discretion under RFU Regulation 5.5.7 to reduce or waive any sanction if the insolvency was deemed to be beyond the control of the club, including in the event of a pandemic.

“We understand the past few months have been difficult for the players, staff and fans of Worcester Warriors Rugby Football Club,” a DCMS spokeperson said.

“We have worked around the clock with the club’s directors, the PRL and the RFU to explore all possible options but during this time the owners’ have been unable to secure new investment for the club.

“In order to give the club the best possible chance of survival, and to protect a significant taxpayer investment, we have today agreed to the directors’ request to place the club into administration.

“We will now apply to the court to appoint administrators and will begin work to explore all possible options to protect creditors and preserve the local rugby offering in Worcester.”

The RFU is already working with Premiership Rugby and the DCMS to establish what the Warriors’ suspension will mean in terms of the competitions affected.

“The owners of Worcester Warriors have not met the RFU’s 5pm deadline to evidence insurance cover, availability of funds to meet the monthly payroll, and a credible plan to take the club forward,” a statement from the RFU said.

“The RFU has therefore suspended Worcester Warriors from all competitions, including the Gallagher Premiership, Allianz Premier 15s, U18s Academy Cup and Allianz Cup with immediate effect.”

RFU chief executive officer Bill Sweeney expressed his thanks to all involved at the Warriors whose efforts have allowed the club to continue playing during the opening weeks of the 2022/23 Premiership season, but added the governing body were left with little choice but to suspend them from all competitions.

“We appreciate this is incredibly difficult news for fans, staff and players,” Sweeney said. “We would like to thank the staff and players who have worked tirelessly over recent weeks to enable matches to continue.

“We met with players and staff last week to explain why this action would be necessary and regrettably without assurances in place we have had to take this action to protect everyone’s best interests.

“We hope a buyer can be secured to allow Worcester Warriors and The University of Worcester Warriors to return to professional league rugby. While it is the responsibility of each business owner to manage their individual finances, we will look at learnings from this situation to see what regulation can be put in place to provide all parties with more financial transparency. Rugby is a relatively young professional sport and it has been widely recognised that clubs have been facing financial challenges even before Covid.

“Successful professional leagues are vital for the wellbeing of the whole game. They inspire current and future players, delight fans by showcasing high skill levels and the exciting nature of our game. This is why it is so important that we continue to work with Premiership Rugby to improve the structure, governance and business model of rugby union in England.

“The RFU will continue to support community rugby in Worcester and is fully committed to ensuring local academy opportunities are provided for pathway players.”

The news of Worcester’s suspension was followed by Premiership rivals Wasps, who last week filed a notice of intent to appoint an administrator, tweeting their support for the Warriors.

“Wasps and the entire rugby family stands as one with all the players, staff and supporters of Worcester Warriors,” a post on the Coventry-based club’s Twitter feed read.

On Saturday evening, the night of their Round 3 Premiership victory over Newcastle Falcons at Sixways, director of rugby Steve Diamond looked to be sending out a farewell message.

“It’s been some ride with the Warriors. Loved every minute. Good night from me,” Diamond posted on his Twitter account, prefacing the message with the hashtag that Worcester’s players and staff have been using throughout the club’s difficulties ‘#TOGETHER’.

Diamond had been a stoic figure and assured leader during Worcester’s challenges. He joined the club as lead rugby consultant back in November 2021 and in January this year, it was announced he would become director of rugby following Alan Solomons’ retirement at the end of June.

The Warriors were due to face Gloucester in the Premiership on Saturday, but that match at Kingsholm is now off following the suspension being announced.

“The Club awaits further information as to whether the fixture is cancelled or postponed and will update supporters as soon as possible thereafter,” Gloucester said in a statement.

“Our thoughts go to Worcester Warriors players, staff and supporters following the news of their suspension from the league. We hope to see them return to the Premiership again soon.”

Premiership Rugby confirmed the news of Saturday’s fixture now not taking place in an announcement of their own and chief executive Simon Massie-Taylor insisted the competition will remain in daily contact with both Worcester and the RFU.

“Although the RFU decision to suspend Worcester Warriors from all competitions won’t be a surprise to many, I know this will continue to be a distressing time for the players, staff and supporters at the club and we will continue to support them where we can during this next phase,” Massie-Taylor said.

“This decision affects other clubs in the league too and we are sorry for the disruption it has caused Gloucester Rugby and its supporters whose home fixture will no longer take place this weekend.

“We will be continuing to review the situation daily with the club and RFU.”

Kvesic: It’s a bit of an emotional rollercoaster

Worcester forward Matt Kvesic was at Sixways along with some of the club’s supporters waiting for news on Monday and explained to Sky Sports News how he and his team-mates have been coping during this difficult period.

“It’s been obviously mostly frustrating, challenging and a bit of an emotional rollercoaster,” Kvesic said. “We’ve had good news, then bad news, and then it’s just getting my head around what the next week or two will look like. I’m just trying to positive and hopefully we can move forward.

“I think we’ve shown we’ve been in that right headspace the last few weeks and it was good to get a win [at home to Newcastle] on the weekend.”

The 30-year-old back row admitted the players are resigned to their wages for September being delayed as has been the case in recent months and have made their own preparations to mitigate the impact of that.

“I’ll be honest, I think this is the fourth or fifth month in a row we’ve had late payments anyway, so we’re sort of ready for that,” Kvesic said.

“Most of the boys have got their heads around it and are adjusting…so hopefully at some point we will be paid. That’s all up in the air, but it’s stuff that’s out of our control.”

Jones: I feel for all involved at Worcester

Worcester’s plight has drawn sympathy from England head coach Eddie Jones as well, with the news coming on the same day he announced a 36-man training squad ahead of the upcoming Autumn Nations Series.

Jones told Sky Sports he understood the difficulties facing all involved with the club.

“I feel particularly for the Worcester players, the staff and their fans,” Jones said. “Whenever you’ve got that uncertainty about your future, and it sounds like some of the staff haven’t got paid, it’s a difficult time and you want to reach out and help those people.

“Whether Wasps go into that situation we’re not sure, but it’s a time where the competition needs to look at itself and I’m sure it will.”