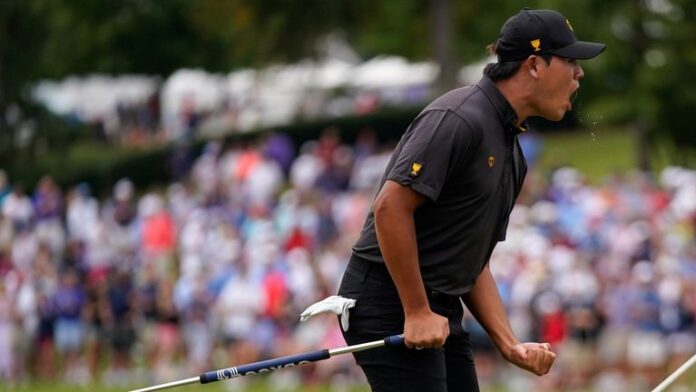 Spieth on 2023 Ryder Cup hopes for Team USA, following their 17.5-12.5 Presidents Cup victory: “I’d take this team over there against anybody in the world. I’m very confident in our ability to go over there and win.”

Jordan Spieth has set his sights on ending Team USA’s 30-year wait for an away Ryder Cup victory after playing a pivotal role in another convincing Presidents Cup win.

The three-time major champion became just the sixth player in Presidents Cup victory to win all five of his matches in the biennial contest, four when partnering Justin Thomas, as Team USA ran out 17.5-12.5 winners over an inexperienced International Team at Quail Hollow.

Spieth also featured in Team USA’s record-breaking 19-9 Ryder Cup victory over Team Europe at Whistling Straits last September, his fourth consecutive appearance in the event, with the 29-year-old likely to play a key role once again when the contest heads to Italy in 2023.

Team USA will likely arrive as pre-tournament favourites to successfully retain the Ryder Cup, which would be their first victory on European soil since 1993, with Spieth fully confident that the Americans can end their long winless record in away contests.

Asked about Team USA’s confidence heading into next year’s Ryder Cup in Italy, Spieth told reporters: “The same as it was the Sunday a year ago, if not more, right? It’s a tall task to ask, going over there. I mean, I’ve played in a couple of away games now, and they’re very different. But I mean, I’d take this team over there against anybody in the world.

“I think that winning at home is special in its own way, and there’s nothing that beats it. But going over there on the road and winning would be incredibly special next year, and I really hope I’m a part of the team.

“The kind of team rooms that I’ve mentioned that we’ve had the last few years, it’s going to stay that way, and I’m very confident in our ability to go over there and win. You could tell me the last time it happened over there, but nobody here has any scar tissue. Everybody on this panel would very much embrace what that looks like next year.”

Davis Love III’s American side were overwhelming pre-tournament favourites as they boasted their strongest-ever team in terms of world ranking, alongside the fact that the Internationals were fielding eight rookies, although Spieth insists Team USA were unaffected by extra pressure.

“I think that the biggest challenge for us this week was staying within ourselves and not letting the outside noise get to us,” Spieth added. “We saw notes that Captain Love put up all over the place, that we were supposed to win and we’re favourites and all that.

“Everybody focused on their matches. Everybody wanted to be the one setting the pace or the ones, if you were in the back couple matches of the day, the ones that were showing off for the rest of the team on the last couple. We didn’t focus on any of the outside noise of the entire tournament.

“Instead, what was so cool and has been very consistent in the previous few Cups that I’ve been involved in, is everyone’s really good at what they do. Stay to your routine, do what you normally do to prepare for the biggest tournaments, and they did that. Nobody took anything lightly.”

‘Living in a nightmare’: Kyiv families without water or electricity in...

THE TERRACE OF THE CHARLES HOTEL HAS BEEN TRANSFORMED INTO A...