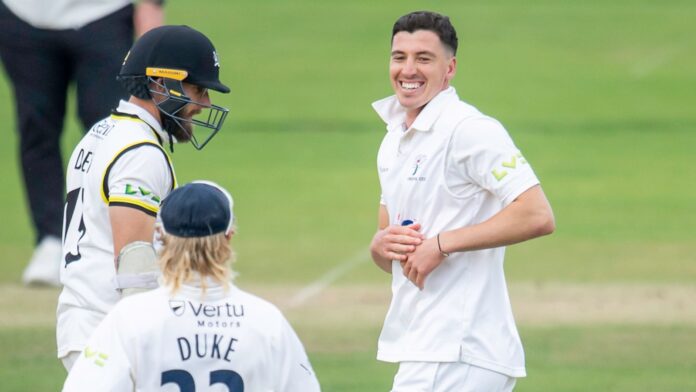 England fast bowler Matthew Fisher took 4-45 to help bowl Gloucestershire out for 190 in a game where Yorkshire need 10 points to ensure Division One safety; Plus the rest of the matches from day one in both divisions

Fit-again Matthew Fisher starred for Yorkshire on day one against Gloucestershire at Headingley as the White Rose bid for LV= Insurance County Championship safety.

England fast bowler Fisher, making his return to action after a stress fracture of his back, helped the hosts bowl already-relegated Gloucestershire out for 190 shortly before tea by taking 4-45 from 12 overs.

James Bracey top-scored for the visitors with 71 as they failed to make the most of electing to bat. Yorkshire’s reply then closed on 80-3 in the 27th over, bad light ending the day almost 12 overs early.

Yorkshire came into the game 15 points ahead of second-bottom Warwickshire in Division One, knowing a maximum 10-point haul would guarantee safety, and have already secured three.

Also looking to seal survival are Kent, a point behind Yorkshire at the start of the day. Day one of their home clash with Somerset saw the away side on 195-9 at stumps.

Lewis Goldsworthy was unbeaten on 93, after almost single-handedly helping his team recover from 9-3.

Nathan Gilchrist took 5-55 and was on a hat-trick when bad light and rain stopped play at 5.07pm.

Warwickshire made a solid start against Hampshire at Edgbaston, reaching 138-2 on a day stripped of 55 overs by rain and bad light.

There were also half-centuries by Steven Croft (86) and George Balderson (53 not out) as Lancashire compiled a mammoth opening-day total of 414-5.

Northamptonshire held Essex to 220-8 on a rain-affected opening day at Wantage Road.

Despite wickets falling in clumps – with Tom Taylor claiming three – a captain’s knock of 55 not out from Tom Westley helped keep Essex in the contest in a ninth-wicket stand of 68 in 20 overs with Ben Allison (37).

In Division Two, leaders Nottinghamshire put together exactly the kind of opening day they would have hoped for against Durham at Trent Bridge as they seek to clinch promotion, with Haseeb Hameed and Matthew Montgomery hitting a century apiece.

Hameed’s 115 and Montgomery’s 101 not out – his maiden first-class century – helped Notts close on 276-2, knowing a draw will guarantee they go up and that a victory wins them the title.

It enabled the visitors to collect two of the maximum haul of 16 points needed to ensure their promotion to Division One.

Third-placed Glamorgan, needing a win to have any chance of finishing in the top two, made good progress on a rain-affected first day at Sussex, reaching 221-3.

India batter Shubman Gill led the way with an unbeaten 91 off just 102 balls, while skipper David Lloyd scored 56 against a tame Sussex attack.

England Lions bowler Sam Conners returned his best County Championship figures of the season as Derbyshire made the early running on the opening day against Leicestershire.

Conners took 5-51 en route to the hosts bowling Leicestershire out for 249, with all-rounder Tom Scriven having scored 53. The hosts then reached 57 without loss when bad light ended play early.

Why we think we’re in a recession when the data says...

Tesla short sellers have made $11.5 billion profit this year