Home World At least 11 children among dead after gunman opens fire at school... 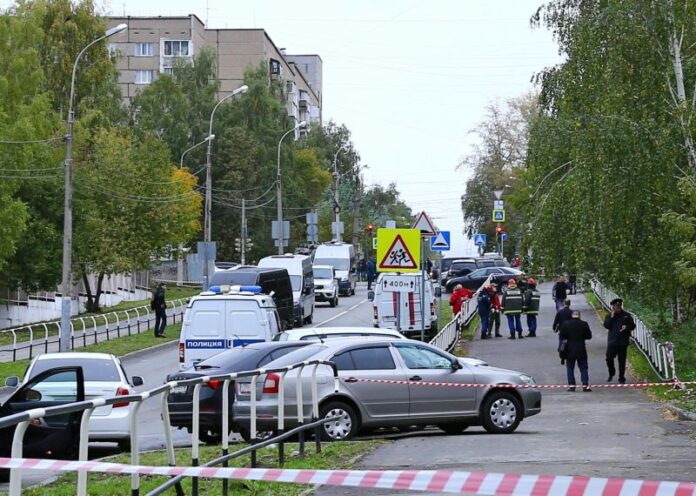 At least 11 children were killed when a gunman wearing Nazi symbols opened fire at a school in the western Russian city of Izhevsk, Russian authorities said Monday.

Fifteen fatalities have been recorded so far. Among those killed was the school’s security guard, head of the regional government Alexander Brechalovn said in a video statement.

The shooter, who was reportedly wearing a black T-shirt with Nazi insignia and a helmet, died by suicide following the attack, according to Russian state news agency TASS.

Russian officials named the shooter as Artem Kazantsev, a local resident born in 1988 who was an alumnus of the school where the shooting took place. The identification process was delayed because no documents were found on the body of the suspect, TASS reported.

Investigators have started searching Kazantsev’s residence and probing reports of his “neo-fascist views and Nazi ideology,” Russia’s Investigative Committee said. Kremlin spokesman Dmitry Peskov said the attacker was “a person who, apparently, belongs to a neo-fascist organization or group.”

The attack took place at School 88 in Izhevsk, the capital of Russian region of Udmurtia. It has since been evacuated, Brechalovn said.

Russian President Vladimir Putin sent condolences to the victims, according to a statement released by the Kremlin on Monday.

“The president deeply sympathizes with all those who lost their loved ones, their children in this tragedy, and wishes recovery to those who were injured as a result of this inhuman terrorist act,” Peskov is quoted as saying in the statement.

This is at least the third school shooting in Russia or territory controlled by the country in the past two years. In May 2021, a gunman killed seven children at a school in Kazan, the capital of Russia’s Tatarstan Republic. Five months later, 20 people were killed when an assailant set off a bomb and started shooting at a college in Russian-occupied Crimea.

Putin responded to the attack in Kazan by calling for new gun control measures, which became law in June 2021. Peskov said Monday that authorities would take another look at just how effective those regulations were in light of the most recent shooting.

Russia has in recent years seen rising concerns that copycat criminals in the country could attempt the type of massacres that have plagued schools in the United States.

Those fears were particularly acute in the aftermath of the 2018 school shooting in Parkland, Florida, in which 17 people were killed. The month before Parkland, three school attacks were reported throughout Russia. The teenage perpetrators in those incidents used air guns and knives, not semi-automatic weapons, and the victims suffered injuries, with no deaths reported, according to state media.

Izhevsk, scene of Monday’s attack, is home to more than 600,000 people, making it one of Russia’s 20 most populous cities. It was founded as a steelworks settlement in 1760 and remains a prominent industrial center.

The city is perhaps best known as the home of the AK-47 rifle and the longtime residence of the Soviet lieutenant general credited with its development, Mikhail Kalashnikov.