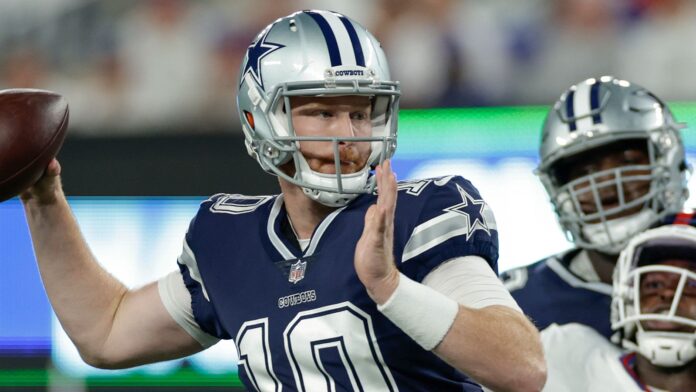 The Cowboys (2-1) defeated the Giants (2-1) for the 10th time in their past 11 meetings, ending their unbeaten start to the season in the process; watch Thursday Night Football – Miami Dolphins @ Cincinnati Bengals – live on Sky Sports NFL, 1.20am, Friday

Cooper Rush passed for 215 yards and one touchdown and Tony Pollard rushed for 105 yards as the Dallas Cowboys notched a 23-16 victory over NFC East rivals the New York Giants on Monday Night Football.

Rush completed 21 of his 31 pass attempts to guide the Cowboys (2-1) to their second consecutive win with him starting in place of regular quarterback Dak Prescott, who is out with a fractured right thumb. Rush threw the go-ahead touchdown in the fourth quarter to CeeDee Lamb, who caught eight passes for 87 yards.

Ezekiel Elliott also rushed for 73 yards and a TD, while on the defensive side of the ball DeMarcus Lawrence matched his career-high of three sacks as Dallas defeated the Giants (2-1) for the 10th time in their past 11 meetings, curtailing their unbeaten start to the season in the process.

Daniel Jones connected on 20 of 37 passes for 196 yards, with one interception, and added 79 yards on the ground, while New York’s star running back Saquon Barkley rushed for 81 yards and one touchdown.

Dallas took a 20-13 lead late on courtesy of Rush’s goal-line TD toss to Lamb with eight-and-a-half minutes remaining. The pair had teamed up for a 26-yard pass play prior to the one-yard score.

The Cowboys defense then forced the Giants to punt, and KaVontae Turpin’s 28-yard return placed the ball on the New York 35-yard line. The return set up a Brett Maher 44-yard field goal that made it 23-13 with six minutes left.

The Giants moved back to within seven courtesy of Graham Gano’s 51-yard field goal inside the final four minutes but, though they’d get the ball back on offense one last time, Trevon Diggs intercepted Jones and Dallas took over at the New York 29-yard line and ran out the remainder of the clock.

After a cagey first half containing only field goals, Barkley had earlier given the Giants a 13-6 lead when he scampered 36 yards for a touchdown midway through the third quarter. But Dallas answered straight back with a crisp nine-play, 75-yard drive capped by a goal-line score from Elliott.

Rush and Lamb’s link-up in the final quarter then separated the teams and the Cowboys held on for a crucial divisional victory.

Why we think we’re in a recession when the data says...

Tesla short sellers have made $11.5 billion profit this year