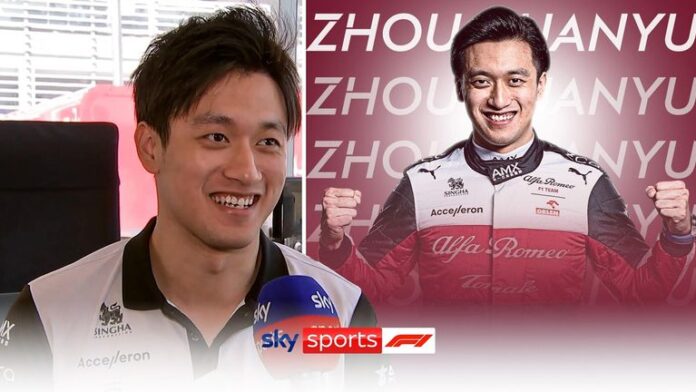 Zhou Guanyu has signed a new deal with Alfa Romeo to keep him on the Formula 1 grid for the 2023 season.

Zhou, the first full-time Chinese driver in F1 history, joined the sport as a rookie this year and has impressed Alfa Romeo alongside experienced race-winning team-mate Valtteri Bottas to earn a new contract.

His renewal closes another door in the driver market, with now only three seats – at Alpine, Haas and Williams – officially available.

“I think the team is very satisfied with everything I was able to do and I’m happy with the job I was able to do this season,” Zhou told Sky Sports F1. “Looking forward to have many more to come together.”

Zhou said he is only on a one-year deal but hopes to improve further in 2023 to keep his seat.

“We have to see where my performance is, it’s a little bit similar to this year,” he said. “It’s normal, but also a bit of pressure. I like to have pressure, you can’t take time off to be relaxed.

“I’m always trying to push myself, and I think like this year and I’m able to do the job, why not have more [years] in the future.”

Zhou is 11-6 down to Bottas, who joined from Mercedes after five years alongside Lewis Hamilton, in the qualifying head to heads, while he has scored six points to his team-mate’s 46. But Bottas was always expected to be the team leader given Zhou’s inexperience at the pinnacle of motorsport.

“He’s been amazing – he’s one of the best team-mates I’ve ever had,” said Zhou of Bottas. “Having such an experienced and quick team-mate, one who’s very open, I’ve learned a lot.

“He did help me massively during this learning curve, and I’m very lucky to have him.”

Alfa Romeo have enjoyed an improved 2022 season and are currently sixth in the team standings. They called Zhou one of the “best surprises of their season.

“From day one with the team, at the Abu Dhabi test last year, he has impressed me with his approach to work and this is always a very positive trait,” said team boss Frederic Vasseur.

“We knew he was quick, but the way he adapted to Formula 1 in such a short time has been one of the best surprises of our season.

“I am sure he will make another step forward as we continue to grow our team.”

‘Lovely guy’ Matt Hancock makes it to the final four of...