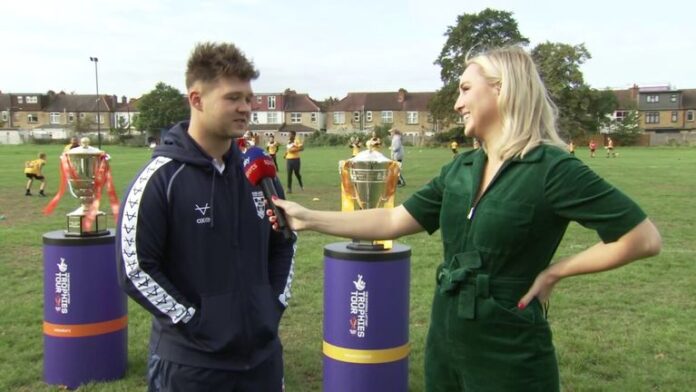 Tom Halliwell is excited to see Wheelchair Rugby League set to grow with the World Cup in England this October; Leeds Rhinos take on Halifax in the Wheelchair Super League Grand Final this Saturday, live on Sky Sports at 3.30pm

The next six weeks could be filled with ground-breaking moments for England Wheelchair Rugby League captain Tom Halliwell.

The Leeds Rhinos star has Rugby League World Cup victory in his sights, but first he has one last job to do for his club on Saturday.

As Leeds take on Halifax in the Wheelchair Super League Grand Final, Halliwell wants to wrap up a clean sweep for the Rhinos who have dominated the wheelchair competition this year.

“We have won the League Leaders and the Challenge Cup so far as Leeds so if we win the Grand Final then we will get the clean sweep and the treble,” Halliwell told Sky Sports News.

“It is going to be a tough game, Halifax have got world-class players throughout their team and we will have to be on it to beat them.

“It is on Sky Sports live so the more people that tune in the better.”

The Rugby League World Cup will see the men’s, women’s and wheelchair teams compete in tandem across England and, for Halliwell, there has never been a more perfect opportunity to grow the game and shine a light on what Wheelchair Rugby League has to offer.

“I grew up as a young lad playing rugby league and I have troubles with my shoulder so I have had surgery on that in the past and then broke my foot really badly so I was wheelchair bound for eight to 10 weeks,” Halliwell added.

“I reached out to my local club Leeds Rhinos and ever since then I haven’t looked back, and now I am England captain.

“Rugby league is all about community and it is a family game, the grassroots.

“The professional game wouldn’t be able to run without grassroots and it is so important, and that just mirrors to the men’s, women’s and wheelchair all on the same page.

“Rugby league is just one big community game and everyone is involved and that is what I love about it.

“For us, as players, it is all about creating a legacy.

“At England, every time we have been together as a squad or in a training camp we want to build a legacy and a path for the future generation, that is what we are here for.

“We want to put the sport in a bigger light and hopefully there will be more people taking part after the World Cup and that is what we are here for.

“We see it as an opportunity to grow the game and grow the sport.”

Watch the Leeds Rhinos take on Halifax in the Wheelchair Super League Grand Final this Saturday, live on Sky Sports at 3.30pm.