Home Sport Woods’ son posts career-low round with Tiger as his caddie! 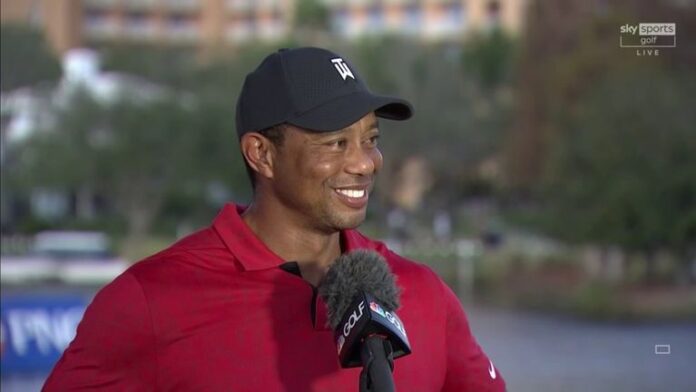 Charlie Woods posted a career-low round of 68 on Sunday at a qualifier for the Notah Begay III Junior National Golf Championship in Florida, where he had father Tiger Woods as his caddie

Tiger Woods switched role from player to caddie to help his son post a career-low round during a junior event in Florida.

On a weekend where Team USA were extending their winning streak in the Presidents Cup, Woods was at Mission Inn Resort on the outskirts of Orlando to see his 13-year-old son once again showcase himself as a potential future star.

Charlie Woods, who has impressed alongside his dad in the last two editions of the PNC Championship, posted a four-under 68 during the final round of a qualifier for the Notah Begay III Junior National Golf Championship.

With the 15-time major champion as caddie, Woods Jnr responded to an opening-round 80 in the 36-hole event by mixing an eagle and three birdies with a lone bogey during an impressive Sunday.

The highlight of his round came at the par-five 14th, where he tapped in for eagle after lipping out for albatross with his approach, with Woods finishing tied-fourth in the Boys 12-13 division.

Woods Jnr paid tribute to his dad’s advice, adding: “I couldn’t have done it without him. Some shots I would have been so off!”

What next for Tiger?

An emotional Woods denied rumours of retirement after his early exit from The 150th Open in July at St Andrews, although insisted he had “nothing planned” when asked about his future schedule.

Woods has traditionally played a limited autumn schedule on the PGA Tour, although his caddie Joe LaCava said last month that he hoped to see the former world No 1 return to action in 2022.

“I’m hoping that he will play maybe in December at the Hero [World Challenge] and the Father-Son [PNC Championship] and maybe the Genesis [Invitational],” LaCava told the Dan Patrick Show. “I’m still hoping he’ll play three, maybe four tournaments before The Masters.

The Hero World Challenge takes place from December 1-4, live on Sky Sports, which is a limited-field event Woods hosts through his foundation in the Bahamas and a venue where he made comebacks from injury in both 2016 and 2017.

Woods will almost certainly tee it up in the PNC Championship alongside his son, Charlie, having loved his debut in the father-son contest back in 2020 and finished runner-up in last year’s contest.