Home Sport Salt pummels Pakistan – but will he start at T20 World Cup? 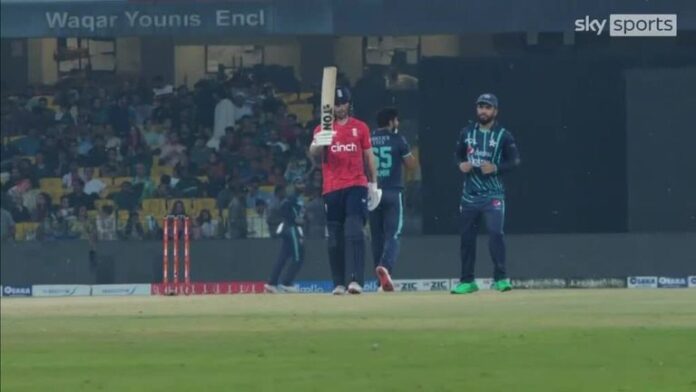 Phil Salt pummelled Pakistan in the sixth T20 international in Lahore – but will that boundary-laden knock propel him into England’s first XI at the T20 World Cup in Australia next month?

With white-ball captain Jos Buttler taking a “cautious” approach in his comeback from a calf injury – he has yet to play at all in the series against Pakistan – Salt and Alex Hales have been the openers.

The consensus seems to be that Salt and Hales are vying for one spot up top at the World Cup and that Hales’ previous successes in the Big Bash League are likely to see him get the nod.

Salt staked his claim for selection on Friday night, though, nailing 13 fours and three sixes in an unbeaten 87 from just 41 balls, giving England quite the selection headache ahead of the World Cup.

“I think the assumption [that Hales will open with Buttler] is right, given Hales’ record in Australia and how relatively inexperienced Salt is in international cricket. But you don’t ignore innings like that,” said Sky Sports Cricket’s Michael Atherton after watching Salt’s spectacular innings.

“There is also an intriguing possibility with him also being a wicketkeeper. We saw in The Hundred [for Manchester Originals] that he kept wicket and Buttler captained from mid-off.

“Buttler has a lot on his plate as opener, captain and wicketkeeper, so England could take a responsibility off of him. You imagine Buttler will still keep wicket for now, but Salt could be an option down the line.”

Salt said: “I’m not looking too far into the future. You need competition, the best sides have that. That’s the same in every sport. Everyone’s trying to put their best foot forward and show the coaches how good they are.

“I’m very grateful for the backing I’ve got from my team-mates and the management – it’s very clear the way they want me to play.

“The way I play is aggressive and I want to win as many games as possible while I’m in an England shirt.”

Salt managed only 19 runs combined in his previous three innings – out for eight, eight and three – but was at his blistering best on Friday.

It took him just 19 balls to reach his second T20I fifty, while he and Hales (27 off 12) creamed 10 boundaries between them across the first three overs as they nailed a 50-run opening partnership in 18 balls.

Atherton added: “It was nice to see Salt go on and finish the game off unbeaten for his best innings in England colours.

“He is very strong down the ground and when the bowlers overpitch his driving is exceptional – it was a treat to behold.

“He is also quick onto the short ball. He has learnt from his errors [in previous games] and placed his pull shots better, and Pakistan had no answer to him. He treated the bowlers with an element of disdain.”

Atherton’s fellow Sky Sports pundit Mark Butcher said: “Brutal, Salt beef, call it what you like. Some of the hitting was ferociously hard, flat sixes over square leg, the shots down the ground. He is able to generate alarming speed when the hands come through and he hits it as hard as anybody.

“He has really improved his off-side play in the last year or so. He was predominantly a leg-side player who looked to shovel everything into the leg-side, but he can now bang it over extra cover if bowlers go wide to him.”

Watch the series-deciding third T20 international between Pakistan and England live on Sky Sports Cricket on Sunday. Coverage begins at 3pm with the first ball at 3.30pm.

A new look for the ABB FIA Formula E World Championship ahead of its Gen3 era!