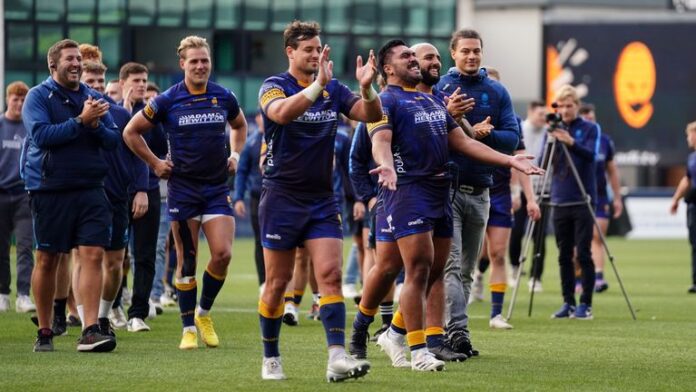 Worcester’s owners released a statement apologising “that we did not have the foresight during the pandemic to cut back on the squad budget, but instead remained committed to giving the club the best chance of being competitive”

Worcester’s owners have taken a swipe at the club’s players and supporters as the crisis surrounding the Gallagher Premiership side deepened.

Colin Goldring and Jason Whittingham issued a statement in response to an interview that Worcester captain Ted Hill did with ITV Central on Friday, in which he said an apology was required “from not only the owners, but also from other people high up from the company as well”.

Addressing “staff, supporters and community of Worcester Warriors”, the owners said: “We are sorry to you all that the club is in this current position, and for the emotional distress this must have caused.

“But we remain hopeful, through the process of administration, that the club can find a new owner and emerge in a stronger position in order to preserve rugby at Sixways.

“We are thankful to those supporters who turned up week in, week out to support the club but sorry that there were not more, nor enough of you on a regular basis to help make the club financially viable, despite the significant personal funds we put into the club.

“We are sorry that we did not have the foresight during the pandemic to cut back on the squad budget, but instead remained committed to giving the club the best chance of being competitive.

“We are thankful to all of the staff that supported the club through Covid in accepting a significant reduction in their salary, but sorry that the playing squad could not accept a similar level of reduction.

“And in some players’ instances would not accept any pay cut at all despite our openness at the financial impact this would have on the club.”

Players could be released from their contracts next Wednesday when a winding-up order issued by HM Revenue and Customs is heard in the high court.

Player contracts and those of some club staff are held by a company called WRFC Players Ltd, which is not in administration and is the subject of HMRC’s action.

It is a subsidiary company of WRFC Trading Ltd, for which administrators Begbies Traynor are seeking a buyer.

Two consortiums, one involving former Worcester chief executive Jim O’Toole, are understood to have expressed interest in buying the club out of administration.

All Warriors players and staff were due to be paid on Friday, but the PA news agency can confirm that has not happened, meaning they are entitled to start looking elsewhere for employment.

For anyone wishing to leave, that would mean a 14-day notice period, before becoming a free agent two weeks later.

But if WRFC Players Ltd is liquidated, Worcester would automatically have no contracted players or staff, effectively seeing them become unemployed, and leaving Warriors with seemingly no option but to drop out of English rugby’s top division.

Worcester’s debts total more than £25m, including at least £6m in unpaid tax, while owners Goldring and Whittingham have been accused of asset-stripping the club.

The club failed to meet a Rugby Football Union deadline on Monday requesting proof of insurance cover and funding for the club’s monthly payroll, which resulted in them being suspended from all competitions.

Goldring and Whittingham, who own WRFC Players Ltd, could request an extension of the winding-up order of up to 14 days, therefore offering a chance for prospective club buyers to retain staff.

In another development, PA understands that administrators were only able to access Worcester’s computer server on Thursday night to start going through relevant material.

The club’s IT provider is a creditor and it is thought they are owed more than £20,000. All WiFi at Sixways and server access was switched off a fortnight ago.

Gloucester were due to host Worcester on Saturday before Warriors were suspended. They will now hold an opening training session at Kingsholm instead.

In a message to Worcester fans published on the Gloucester website, club chief executive Lance Bradley said: “We don’t expect you to suddenly switch your allegiance to Gloucester Rugby and you are welcome to wear your Worcester shirts.

“Our clubs are rivals on the pitch, but not off it. When we see our neighbours going through a tough time it just feels like the right thing to welcome you to our ‘Holm.”