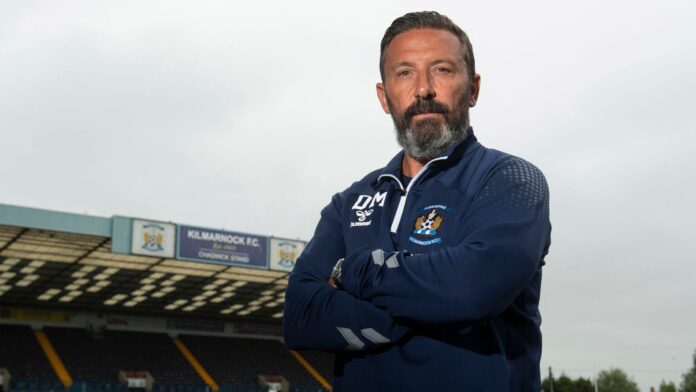 Kilmarnock manager Derek McInnes has signed a three-and-a-half-year extension to his contract on the eve of his return to former club Aberdeen.

The new deal for McInnes, who took charge in January and led Killie to the cinch Championship title last season, will tie him to Rugby Park until 2026.

‘I’m looking forward to the next stage’

The 51-year-old told the club’s website: “I’ve known for a while that Kilmarnock is the place that I wanted to commit my future to, so I’m really pleased that the extension has now been agreed.

“Thanks to the backing of the board and the supporters, the club has come a long way since we joined forces in January and I’m looking forward to the next stage of our journey.

Thanks to the backing of the board and the supporters, the club has come a long way since we joined forces in January and I’m looking forward to the next stage of our journey.

“With a bolstered club structure and strengthening recruitment process behind the scenes, there are plenty of reasons for Kilmarnock fans to be excited about the club’s long-term future.

“In the short term, there’s a lot of football to be played and everyone including the squad, staff and supporters will play their part.”

“It’s important that we establish a long-term strategy for the club, to ensure that we continue to improve on and off the park. Derek is a vital part of our projected growth and with his guidance we believe that, in time, we’ll have built a much stronger Kilmarnock for our supporters and the next generation of Killie fans.”

Scottish Premiership: What to look out for this weekend

Will Derek McInnes make a winning return to Pittodrie?

McInnes takes his Kilmarnock side to Aberdeen as he faces his former club for the first time since leaving in March 2021.

The Dons have impressed this season under Jim Goodwin, but suffered a surprise 3-1 defeat at Hibernian in their last match before the break.

Kilmarnock manager Derek McInnes is uncertain if Kyle Lafferty will feature against Aberdeen as an investigation continues into the striker’s alleged use of sectarian language.

Killie could find themselves bottom of the Scottish Premiership if they fail to pick up their first away win of the season.

They could be without Kyle Lafferty after the Rugby Park striker was charged by the Scottish FA for alleged sectarian language.

All the details from Hampden Park after it was announced Sky Sports will broadcast more Scottish football than ever before including the Scottish Women’s Premier League for the first time.

Sky Sports will broadcast more Scottish Professional Football League (SPFL) matches than ever before and for the first time, the Scottish Women’s Premier League.

From the 2024/25 season, a new four-year extension to the current deal will mean up to 60 cinch Premiership matches per season will be shown exclusively live until the 2029 campaign, with scope to increase this over the term of the deal.

The agreement with the SPFL also means from 2024 Sky Sports will broadcast live from each Premiership ground on up to five occasions every season, one more than the current deal.

Additionally, all top-flight clubs will be able to sell Pay Per View streams within the UK and Ireland of up to five league home games per season, with immediate effect, subject to certain conditions including no matches during blocked hours.

England’s first test match in Pakistan for 17 years in doubt...