Home Sport Hamilton: Black History Month lessons must be taught all year round 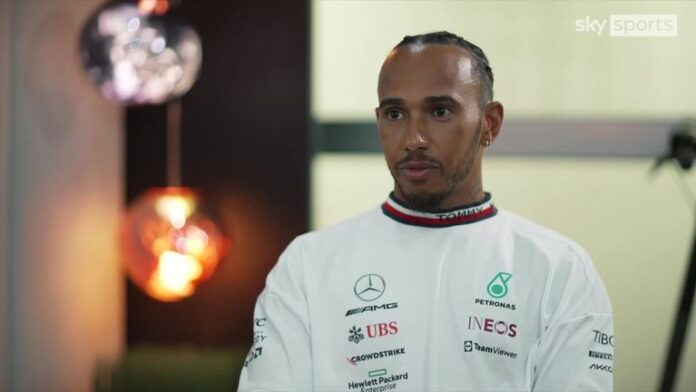 Lewis Hamilton wants Black History Month to be used a catalyst for stories of black history to be more heavily integrated into school curriculums.

The seven-time Formula 1 world champion, who was knighted in 2021, has been listed as a Black History Month hero for his sporting achievements, along with his attempts to promote racial equality.

Hamilton has spoken out for many causes during his remarkable career, with his efforts including supporting LGBTQ+ rights by wearing a flag on his helmet, as well as encouraging other drivers to take a knee ahead of races.

The 37-year-old sat down with fellow racing driver – and Sky Sports F1 pundit – Naomi Schiff ahead of the start of Black History Month on Saturday.

Told about his status as a Black History Month hero, Hamilton said: “That’s the first time I’ve heard that, and the realisation that you can be a part of it, but I think everyone’s a part of it.

“Naturally there are these months to celebrate all those different things through the year, that’s why with my helmet for example, the LGBTQ+ flag that I have on it, I’ve just been running it all year, because there’s no reason it should just be one month.

“It is a great month. When I was at school, we never ever celebrated it and we never any did any history work on it.

“It was never acknowledged at school, which was really frustrating for me, but knowing my family knew about it and being educated at home about certain individuals, the struggle, the empowerment, the movement, some of the amazing accomplishments that have happened through history, that gave me a lot of hope that firstly there’s a place for someone that looks like us, and it was incredibly informative.

“That’s where I learnt about Nelson Mandela, who’s I would say my biggest inspiration.”

Hamilton in 2021 launched a charitable foundation, Mission 44, to address the disproportionately high rate of school exclusions amongst Black students in the UK.

Mission 44, on which Sky have partnered with Hamilton, aims to build a more inclusive education system, to empower more young people from underserved communities and to support progression into key sectors and professions.

“It’s so important as I said that it’s not just one month,” Hamilton continued. “That’s why I’m trying to work with Mission 44 to try to adjust the curriculum so that more of it is included in every-day history.”

“When you’re in England for example and you’re learning about history in class, it shouldn’t be ‘only white people won the war’, which was basically what was talked about.

“When you find out that there were so many different nations that were a part of helping us win the war, and the Windrush generation that came over from Caribbean countries and helped rebuild the UK, those were things that I was never ever told about when I was a kid.

“Those are things that should be studied and acknowledged, so I think the month is good but it should be added not only for BHM, but for all the history. I know it’s hard to cover everything, but they should try.”

THERESA MAY: UK GOVERNMENT ‘FAILED’ THE TRAVEL INDUSTRY DURING PANDEMIC

Travel & Tourism industry can shift to a net-positive model by...

Meghan faced “disgusting and very real” threats when she lived in...

Leaders of New Zealand and Finland hit back at reporter’s question...