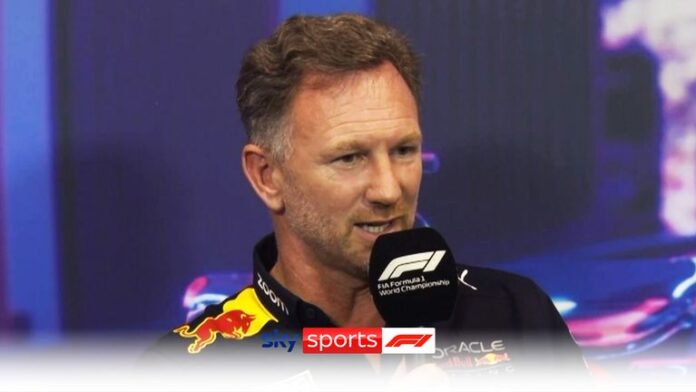 Christian Horner hit back at suggestions from rival teams that Red Bull have breached F1’s budget cap; Horner hinted at the possibility of legal action in response to “fictitious claims”; watch Singapore GP qualifying live on Sky Sports F1 at 1pm on Saturday

Christian Horner has hit out at rival F1 teams for making “fictitious claims” about Red Bull, amid speculation the FIA will next week announce that two teams have breached the sport’s 2021 budget cap.

F1 introduced a budget cap last season of $145m (£114m) and reports on Thursday ahead of this weekend’s Singapore Grand Prix claimed Red Bull were under investigation for breaching the regulations, before Mercedes team principal Toto Wolff said on Friday that it was an “open secret” in the paddock that a team was “massively over” the limit.

Key figures from several other teams, including Ferrari, also discussed the issue publicly before Horner offered a fierce response during the official team principals’ press conference on Saturday.

Horner, as he had done on Friday, insisted Red Bull were confident in their submission, and hinted at the possibility of legal action as he described comments from other teams as “defamatory” and said the team are “looking at what options” are available to them.

“We were a little bit taken aback by comments that were coming from two of our rival teams yesterday,” Horner said.

“The submission between the team and the FIA is one that is confidential. I have no idea what the outcome of our rivals’ submissions are, or their accounting treatment or so on, so I would be intrigued to know where their source of information for these fictitious claims have come from.”

The FIA, who are expected to make an official announcement on October 5 on any breaches of the budget cap, said on Friday evening that it had noted “significant and unsubstantiated speculation and conjecture” on the topic and that its ongoing assessment would be “followed without consideration to any external discussion.”

Potential punishment for the teams found to have breached the regulations could range from financial penalties to points deduction, with the categorisation of the infringement as ‘minor’ or ‘material’ the crucial factor.

Red Bull driver Max Verstappen edged out Mercedes’ Lewis Hamilton for the 2021 world championship, and has his first opportunity to clinch an all-but-confirmed 2022 crown in Singapore after dominating the current campaign.

Horner added: “The (comments from other teams) are hugely defamatory, and we take umbrage to them. One can only assume it’s uncoincidental that this is at a point where Max has his first strike at the world championship.

“So unless there is a clear withdrawal of those statements, we will be taking it incredibly seriously and looking at what the options available to us are, because it is absolutely unacceptable to be making comments of the type that were made yesterday, that are totally defamatory to the team, the brands and even to Formula 1.”

After Horner had said on Friday that he “wasn’t aware” of any Red Bull breach of the regulations, Wolff told Sky Sports F1 that Horner’s comments were “funny”, and said the alleged breaches are a “heavyweight issue” that will have implications on results from the three world championships from 2021-2023.

Wolff also urged FIA president Mohammed Ben Sulayem to take a “robust stance” on the matter and said it was of “huge importance” for the regulations to be policed.

Horner, when discussing comments from Ferrari and Mercedes, said: “So perhaps when these accusations are made, people in glass houses shouldn’t throw stones, and we take umbrage and extremely seriously the remarks that have been made, because is it any coincidence that Max has his first shot at winning a world title, and here we are talking nothing but cost caps rather than the phenomenal performance he has had this year.

“I think it’s an underhand tactic that’s been employed to detract from perhaps a lack of performance on track this year, and of course when references are made to last year, this year, next year, we’re going to take that extremely seriously.

“So this is an issue for the FIA to deal with, but also an issue for Red Bull to consider what our position is with those comments that have been made.”

Speaking to Sky Sports F1 shortly after his explosive press conference, Horner further addressed Wolff’s claim on Friday that Red Bull had been being investigated for “weeks and months”.

“Our submission, we believe, is fully compliant with the regulations. It has to be signed off by our auditors way back in March, which was done,” Horner said.

“But, of course, it is the first year of these budget cap regulations and there is a process with the FIA that I hear, for example, we have been under investigation for six months.

“It is complete rubbish, we heard from the FIA 10 days ago asking for some clarifications, as you would do in a standard audit. Now, that I don’t think is a six-month investigation and most of the time we have had visits they have been en route from Brackley.

“It is frustrating and somewhat disappointing to have these very serious allegations made against you, against the team, the people, and when I hear that Mercedes have taken the pain of making 40 redundancies, that is less than 50 per cent of the redundancies and pain we have been through at Red Bull Racing.

“It is fictitious and we are extremely disappointed. I was pleased to see the FIA came out and say they are in their process, no results have currently been given and provided, so let’s follow that process and see where we end up.”