Home Culture It’ll cast a spell on you: Disney+ sequel ‘Hocus Pocus 2’ is... 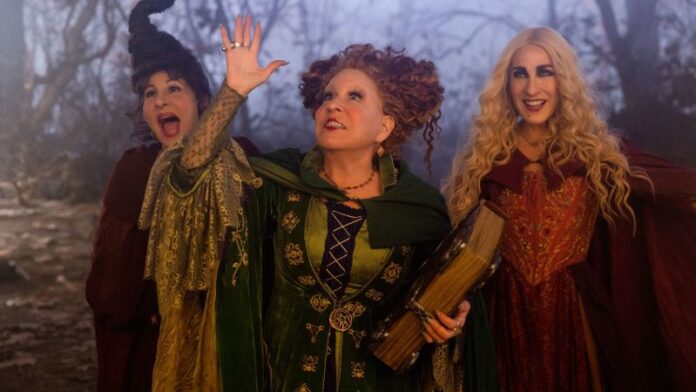 A version of this story appeared in Pop Life Chronicles, CNN’s weekly entertainment newsletter. To get it in your inbox, sign up for free here.

Why am I already seeing Thanksgiving decorations out and about?

Halloween-themed decor I can understand, but Thanksgiving is still months away and just a stone’s throw from Christmas, Kwanzaa and Hanukkah – it all feels way too soon.

What I am ready for is cooler temperatures, though, so I have an excuse to stay in, curl up on the couch and watch some of this week’s new streaming content.

Speaking of Halloween: Almost 30 years after Bette Midler, Kathy Najimy and Sarah Jessica Parker blessed us – or should it be cursed us? – with what’s widely considered the official film for the spooky season, the trio is back as our favorite witches in a sequel to the Disney classic “Hocus Pocus.”

The new movie resurrects both the Sanderson sisters and some of the original movie’s premise – a trio of high school students has to try and stop them seeking revenge (again) on the town of Salem after mistakenly unleashing some dark magic and bringing them back to life. Wouldn’t you be tempted to light the Black Flame Candle to hear Midler belt out a show tune, though?

The former Bond girl has been winning rave reviews for her leading role in new movie “Blonde,” and how she channels the Hollywood bombshell, whose life – and death at the age of 36 in 1962 – was controversial in just about every sense.

“Blonde” dramatizes the life of the tragic actor, with an unconventional (and also controversial) narrative that seeks to peel back layers and go beyond her superstardom to better uncover the real Norma Jeane Mortenson.

‘Yvonne Orji: A Whole Me’

If you saw “Momma I Made It!” – Yvonne Orji’s first HBO special – then you are probably giggling to yourself about the title of her second.

In “A Whole Me,” the “Insecure” star is back with a second comedy showcase that mixes stand-up and scripted skits, talking everything – including the Covid-19 pandemic, dating and relationships – as well as peppering in some hilarious stories about her parents, who also played a central role in her first special.

Orji’s new special debuts tonight at 10pm on HBO and will subsequently stream on HBO Max (both of which are owned by CNN’s parent company, Warner Bros. Discovery).

Undoubtedly one of Iceland’s greatest musical exports, Björk is back with new music.

“Fossora” is her 10th album, and she explained its theme to Pitchfork as an embodiment of her “fungus period.”

“It’s something that lives underground, but not tree roots,” she explained of the mushroomy metaphors that guided the new album. “A tree root album would be quite severe and stoic, but mushrooms are psychedelic and they pop up everywhere.”

“Fossora” is out now.

I have been obsessed with Rita Wilson since she rapped Naughty by Nature’s “Hip Hop Hooray” in the early days of the pandemic.

And let us not forget, as such a performance would suggest, that she is also an accomplished singer. Her latest album, “Rita Wilson Now & Forever: Duets,” includes collaborations with major artists, including Keith Urban, Josh Groban, Willie Nelson, Elvis Costello and Leslie Odom Jr.

“These songs feel like my Great American Songbook, because of the songwriting and the impact that they had on me,” Wilson said in a statement. “I was looking at these songs and how they could be conversations between two people. I liked that the lyrics could be coming from two points of view, even if they were mostly written for one person to sing.”

The album is also out now.

Kelly Ripa is spilling the tea.

In her new book, “Live Wire: Long-Winded Short Stories,” she talks about how tough things were at times with her former “Live with Regis and Kelly” cohost Regis Philbin.

Those who loved the daytime show, which ran from 2001 to 2011 on ABC, may be surprised by the rough start the pair had in the beginning.

According to Ripa, who shared details of her challenges with People, when she showed up at the beginning of her cohosting gig with her hair and makeup team, Philbin had a barbed quip for their producer, Michael Gelman: “Uh-oh, Gelman, it’s got an entourage.”

“I felt horrible,” Ripa recalled. “He was probably trying to be funny, but at the same time it felt like a pile-on. I understand that probably he didn’t want a cohost, but the network wanted me to be the cohost and I didn’t think I should pass up that opportunity. I don’t think it was fair to him. But it was also not fair to me.”

For me, that story helped put into context Ripa’s tension with her “Live with Kelly and Michael” cohost Michael Strahan, who famously left the show in 2016 amid Ripa’s complaints that she was the last to know of his decision.

Anything hard-earned is likely to be jealously guarded, after all.

A common theme I respect in celebrities is their using their platforms for the greater good.

Which is why I was thrilled to learn (via my CNN colleague Marianne Garvey) that rapper Megan Thee Stallion has launched “Bad B*tches Have Bad Days Too,” a website offers mental health resources, among others.

Megan Thee Stallion garnered fascination from many with her determination to graduate college while being a multiplatinum-selling artist, and her latest project further confirms how very much she values education.

By educating her fans about self-help and self-care, the rapper is an even bigger star in my eyes.