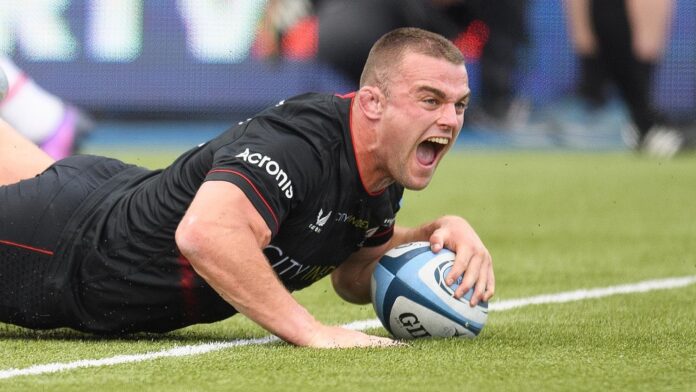 Daly and Earl were at the heart of their side’s demolition job at StoneX Stadium, both crossing five days after being omitted from Eddie Jones’ first training squad of the autumn.

A strong supporting cast headed by Max Malins, another player jettisoned by Jones, helped them run rings around the champions as the new emphasis on attack introduced for this season produced seven tries

Willing to strike from all quarters of the pitch, Saracens played at a pace that left Leicester chasing shadows, using clever offloads and smart lines to devastating effect, especially in an irresistible first half.

To make matters worse for Tigers, Handre Pollard’s debut as an interval replacement lasted only 27 minutes because of injury and it was also an afternoon to forget for Anthony Watson, who was representing his new club for the first time.

Saracens did not escape without a cost, however, as England hooker Jamie George was forced off at half-time because of an ankle injury.

Ollie Hassell-Collins and Ben Loader both scored hat-tricks as London Irish produced a breathtaking first-half performance which blew Bath away.

Irish led 35-5 at the interval before the home side took their foot off the pedal to allow Bath to stage a spirited rally as the game ended 47-38.

Bath had no answers to the slick handling of the home backs in the opening period, with their cause not being helped by early injuries to forwards GJ van Velze and Josh McNally, and a yellow card for Josh Bayliss.

It was Bath’s fourth consecutive league defeat, which has seen them ship a total of 154 points.

Sale maintained their fine unbeaten start to the Gallagher Premiership season with a dogged 28-20 victory over in-form Exeter.

Joe Carpenter’s try on his Premiership debut plus scores from captain Ben Curry and Akker van der Merwe sealed a first victory for the Sharks over Exeter in five and ended the Chiefs’ own unbeaten start to the season.

Tries from skipper Luke Cowan-Dickie and Sam Maunder were not enough for the Chiefs, who rued their missed opportunities and were denied a losing bonus point when Henry Slade’s long-range penalty attempt at the death fell short.