Home Sport Jefferson: London ready for the Griddy | ‘No one can guard me’ 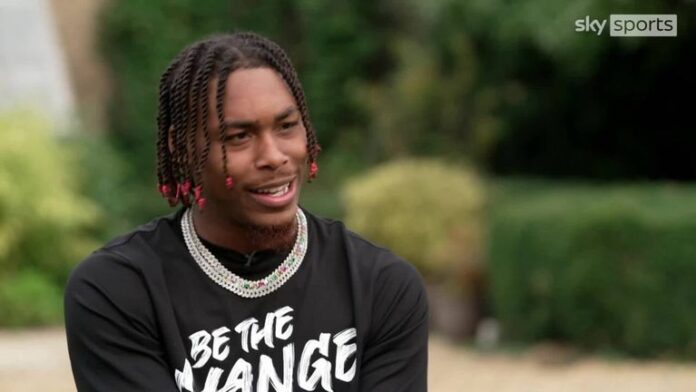 Justin Jefferson: “I’ve got to have that swagger leading into the game; that helps with my performance, that mentality that no one can guard me”; watch the Vikings face the Saints at Tottenham Hotspur Stadium on Sunday, live on Sky Sports NFL from 2.30pm

Justin Jefferson is the best wide receiver in the NFL. Fact. Or certainly he has been since he entered the league as the 22nd pick in the 2020 Draft.

Jefferson leads the NFL with 3,262 receiving yards in the subsequent two and a bit seasons, picking up right where he left off in Week One of this campaign with nine catches, 184 yards and two TDs in a dominant display against the Green Bay Packers.

Now, he and the Vikings take his talents to London as they face the New Orleans Saints in the first NFL International Series game of the season at the Tottenham Hotspur Stadium on Sunday, live on Sky Sports NFL from 1.30pm (Kick-Off, 2.30pm).

Speaking exclusively to Sky Sports ahead of the contest, Jefferson says his success is down to an unwavering confidence and mindset that “no one can guard me”.

“That confidence I’ve always got to have, especially come game time,” Jefferson said. “I’ve had that ever since I was a little kid.

“On game days, that switch turns on and it’s a whole different mode. I have to have that mentality, no matter who I’m going up against – even if it’s the best cornerback to ever play the game.

“I’ve got to have that swagger leading into the game; that helps with my performance, that mentality that no one can guard me.”

And certainly no Packers player could guard him on that opening-day win over Green Bay, a performance that prompted Packers quarterback Aaron Rodgers to say, “best player on the field today”. Head coach Matt LaFleur too conceded Jefferson “wore us out today”.

It’s set to be a partnership that will flourish over the coming years in the NFL, with Jefferson already waxing lyrical over what the new coach has brought to the team.

“It has been great,” he said. “KO [Kevin O’Connell] has been doing a great job with putting different plays in to try and get me open.

“Ever since he got here, it has been a relief – it has been great to have a head coach that connects with his players very well.

“We have been having so much fun just being around him; he is a great guy, great coach – we’re definitely happy to have him on our team.”

‘I can’t wait to get in the endzone in London’

That said, Jefferson has seen his targets and impact on the game reduced in the last couple of games following on from that stellar opening against the Packers.

He has been held to only nine catches and 62 yards the Weeks Two and Three combined, with his 4.7 yards per reception in last Sunday’s win over the Detroit Lions a career-low mark.

“It’s definitely frustrating,” Jefferson said. “You don’t want to finish a game with just three catches and a little bit of yards. But some of that comes with double coverage and defenses keying in on you.

“That opens things up for other players on the offense. And it is what it is at the end of the day, as long as we get the win.”

Jefferson is eyeing up precisely that, and a personal trip or two in the endzone on Sunday in London, where his trademark celebration will get a run out.

Asked if he thinks UK fans are ready for ‘the Griddy’, Jefferson answered confidently in the affirmative: “I think they are.

“I can’t wait to get in the endzone; we’re going to get everybody on the whole offense to do the Griddy.”

Watch Justin Jefferson in action for the Minnesota Vikings as they face the New Orleans Saints at the Tottenham Hotspur Stadium in London – live on Sky Sports NFL, Sunday from 1.30pm (Kick-Off, 2.30pm).

Twitter is not safer under Elon Musk – and he has...

Warwick Davis on returning to Willow – the beloved character created...