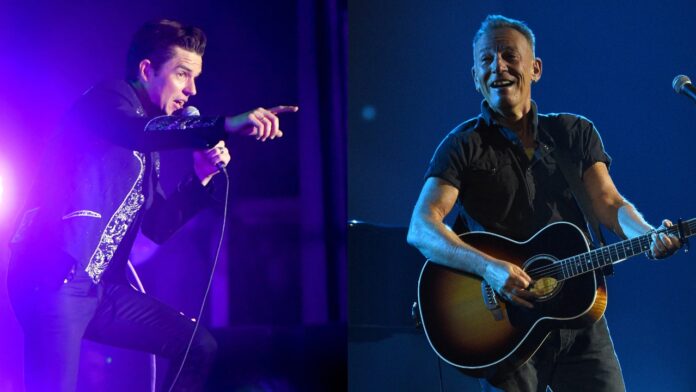 The Killers are currently in the home stretch of their Imploding the Mirage tour, and last night (October 1), they brought out a very special guest at New York’s Madison Square Garden. One Bruce Springsteen joined the Killers onstage during their three-song encore, as Consequence of Sound and Rolling Stone point out. Together, they played classic Springsteen cuts “Born to Run” and “Badlands” as well as “Dustland”—their 2021 collaboration that reworks the Killers’ 2008 Day & Age single “A Dustland Fairytale.” Springsteen and the Killers were also joined onstage by saxophonist and E Street Band member Jake Clemons (nephew of the late Clarence Clemons), who played on all three encore tracks. Watch it all happen below.

The Killers released Imploding the Mirage back in 2020, followed by Pressure Machine last summer. The band will tour through October 12, when they wrap up their trek in Washington D.C. In July, the group brought out Phoebe Bridgers during a Czech Republic concert for a live performance of their joint song “Runaway Horses.” The following month, the Killers released their latest song “Boy” after debuting it during their current tour.

Last week, Springsteen announced his next album Only the Strong Survive, which lands November 11 via Columbia Records. The new LP is a collection of soul covers; Springsteen shared a reimagining of Frank Wilson’s “Do I Love You (Indeed I Do)” along with the announcement. Springsteen also recorded tracks by the Walker Brothers, Jackie Shane, Jimmy Ruffin, and others. His last studio album was 2020’s Letter to You.

Bruce Springsteen & The E Street Band will kick off a tour next year. The group is playing North American shows in the winter and spring before continuing with European concerts in the spring and summer.

Revisit “The Bruce Springsteen and Barack Obama Podcast Is Just Two Guys Talking About Hope” on the Pitch.