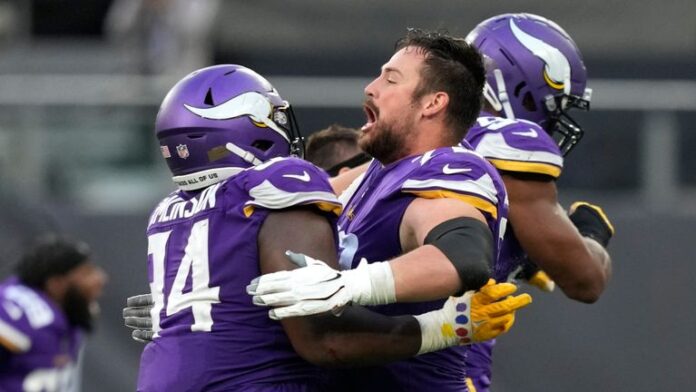 New Orleans Saints kicker Will Lutz misses the chance to take the game to overtime as his 61-yard field goal attempt in the final seconds double-doinks off the goalposts; Lutz had less than two minutes earlier been successful with a kick from 60 yards

The Minnesota Vikings held on to beat the New Orleans Saints 28-25 in a thrilling finish to their NFL International Series game at the Tottenham Hotspur Stadium in London.

In a rip-roaring, see-sawing contest which particularly came to life in the second half, the Vikings appeared to have put the game to bed when Greg Joseph fired through his fifth field goal of the contest to secure Minnesota a 28-25 lead with only 24 seconds left.

But that was enough time for New Orleans to set up a kick of their own in the dying seconds, Will Lutz with the chance to take the game to overtime from 61 yards, having been successful from 60 less than two minutes earlier to tie the game at 25-25.

Lutz’s kick appeared to again have the distance, only for it to then agonisingly double-doink off the left upright and the foot of the goalpost to fall short and secure Minnesota (3-1) the victory.

The Saints (1-3), meanwhile, lose their third-straight game to slip to the bottom of the NFC South and further behind early pace-setters the Tampa Bay Buccaneers (3-1).

Kirk Cousins completed 25 of 38 passes for 273 yards and a touchdown for the Vikings, while Andy Dalton – starting in place of the injured Jameis Winston for the Saints – was successful with 20 of 28 throws for 236 yards and a TD.

Cousins and Alexander Mattison connected on a 15-yard touchdown to cap the first possession of the game and give the Vikings an early 7-0 lead, but both offenses otherwise struggled for much of the first half.

After a Cousins interception, the Saints converted three third downs, the last of which – a four-yard touchdown pass from Dalton to rookie Chris Olave – tied the score. Otherwise, the scoring was left to the boot of Joseph as he kicked 28 and 36-yard field goals either side of a Dalton fumble to secure Minnesota a 13-7 half-time lead.

After a third Joseph FG early in the second half, Dalton and Marquez Callaway teamed up on a 33-yard completion, leading to a Latavius Murray’s goal-line TD that trimmed the Vikings’ lead to two points, at 16-14.

Minnesota then used a fake punt to convert on a fourth-and-2, leading to a fourth Joseph field goal, from 46 yards, but then Taysom Hill ran in for a two-yard touchdown – and Dalton found Jarvis Landry for a two-point conversion – to suddenly see the Saints up 22-19 with just under 10 minutes left in the contest.

The Vikings regained their advantage as Justin Jefferson – who enjoyed a monster day, with 10 catches and 147 yards receiving – ran in a three-yard score, though this time Joseph was unsuccessful with an extra point attempt.

That miss allowed New Orleans to tie the contest courtesy of Lutz’s monster 60-yard field goal, but there was enough time still for Joseph to atone for his earlier miss with a fifth FG and what ultimately proved to be the game-winner, with Lutz this time failing in dramatic fashion with another 60-yard try as time ticked away.