Home Sport Rodgers: Packers game in London ‘a dream’ | ‘I wanted to go... 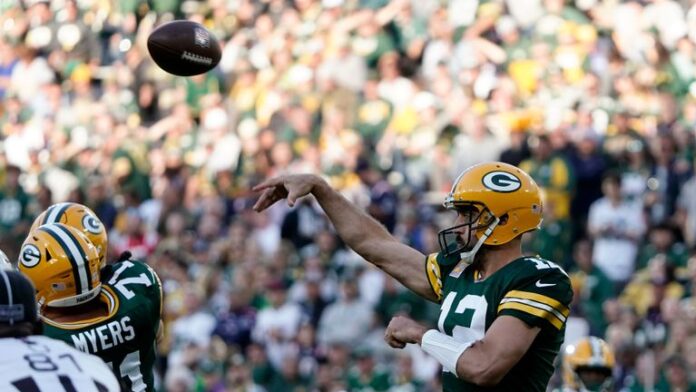 The Green Bay Packers are the 32nd and final team to play in London since the New York Giants appeared in the first game in 2007 at Wembley; Aaron Rodgers: “I wanted to go over early… to get out and see some sights and interact with fans”

Green Bay Packers quarterback Aaron Rodgers says the team’s first ever International Series game in London this weekend is “a dream”, with the reigning league MVP only wishing they could spend more time in the UK.

This Sunday’s meeting between the Packers and the New York Giants at the Tottenham Hotspur Stadium will be the 32nd NFL game to be played in London, with Green Bay also representing the 32nd and final team to make the trip since the Giants appeared in the very first International Series game in 2007 at Wembley.

Earlier this week, Packers head coach Matt LaFleur bemoaned the change in the team’s training schedule as they prepare for a Thursday night flight to London that will see them arrive on Friday morning ahead of a lunchtime practice session. But Rodgers personally wishes the trip was longer.

“Listen, coaches are creatures of habit, even more than players,” Rodgers said of LaFleur’s comments. “Any time there’s a minute adjustment to the schedule, it throws them all out of whack. So I wouldn’t read too much into that.

“We’re all excited. I think the reason I said I wanted to go over early was just to experience a little bit of that culture, to be able to get out and see some sights and interact with fans and… shoot, go to a pub and have a Guinness or whatever the local brew is.

“That’s what we all want to do, those of us that want to go over early.

“Obviously the time we’re leaving might put a little stress on the schedule. But that’s way down at the bottom of the concerns.”

Teams are now required to play internationally on a rotating basis, and Green Bay’s visit was made easier by the addition of a 17th game. The Packers are Sunday’s designated ‘home’ team.

“For us, it’s a dream,” Rodgers added. “I’ve been talking about doing this for years, since they started this – I couldn’t wait to get over there.

“But nobody wants to give up a Green Bay home game. So it’s exciting to finally get a chance to go over.”

Both the Packers and the Giants are currently 3-1 on the season, making it the first time an International Series game in London has featured two teams with winning records. It’s also the first game to feature the reigning league MVP as Rodgers prepares to take centre stage.

As for the Giants, they currently have concerns over the fitness of their starting quarterback Daniel Jones.

Jones suffered an ankle sprain in New York’s 20-12 win over the Chicago Bears last Sunday, and backup Tyrod Taylor left after sustaining a concussion. Jones returned to the game, but was extremely limited.

Jones practised on Wednesday and told reporters after the session that he feels good and will “do everything I can to be out there.”

Forest Green off bottom with win