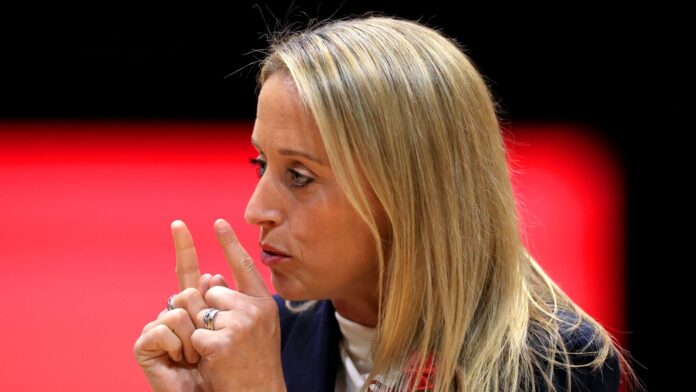 England won their first Test against the She Cranes 60-51 on Wednesday but lost the second quarter 17-9; the team will now play two further matches at London’s Copper Box Arena this weekend; watch the second Test live on Sky Sports Arena from 3.30pm on Saturday

England’s head coach Jess Thirlby wants her side to focus on adapting tactically during their second and third Tests against Uganda this weekend in London.

The Vitality Roses’ three-match series against the She Cranes marks their first outings since a fourth-place finish at the Commonwealth Games this summer.

Thirlby has selected a younger squad for this series, before some of their more experienced individuals return for a tour to Australia.

The opening Test in Nottingham saw England start well but then struggle during a 17-9 second quarter against them. Thirlby then emptied her bench early and a positive second-half produced a 60-51 victory.

“We knew it was going to be a little bit bumpy, they’re a world-class side and we obviously had a few different combinations out there that have had a relatively short time together back in camp,” Thirlby said.

“I’m really proud of the efforts and those more familiar faces in providing the support for others to come on and flourish, in what is a winning debut for a number of players out there.”

With the exception of Harvey, they all arrived following a tricky second quarter in which England’s seven on court weren’t able to change the course of the quarter, as Thirlby noted.

“Tactically the girls out there in quarter two knew the things to expect from Uganda and I left them to see whether or not they could make adjustments quickly, I thought that we were too slow.

“I let them ride out that first half and felt those that were waiting on the sidelines deserved an opportunity to make an impact and in the whole, on balance, they had a great impact in the second half.”

We’ve got to go back to the drawing board and keep on talking about those moments, what is it that’s stopping us from recognising where tactically we might need to change?

With a Netball World Cup on the horizon next year, Thirlby has selected a 14-player squad packed with individuals itching to step up on the international stage. Former England mid-courter Sara Francis-Bayman believes more may be given opportunities on Saturday.

“I believe Jess Thirlby will make changes to the match-day 12 and I think players will come in from the 14, then she’ll probably see how long games go to see how long combinations deserve to stay out there.”

Attacking shooter Paige Reed and Natasha Pavelin were the two individuals not included on Wednesday evening and Nat Panagarry was the 15th member of the squad, but she had to withdraw from the series due to personal reasons prior to it starting.

Uganda will continue on with their limited resources, having just nine players available to them due to visa issues, but their tenacity through court and the 17-9 second quarter highlighted the challenge they’ll continue to pose to England.

Shadia Nassanga will continue to give England’s defenders something else to think about whilst they’re trying to quell Mary Cholhok. At the other end of the court, the more game time Proscovia Peace has to goal keeper, the stronger she’ll get after swapping circles due to their lack of players.

The second Test is live on Sky Sports Arena from 3.30pm on Saturday with a 4pm first centre pass and coverage of the final contest of the series starts at 1.30pm on Sunday on the same channel.