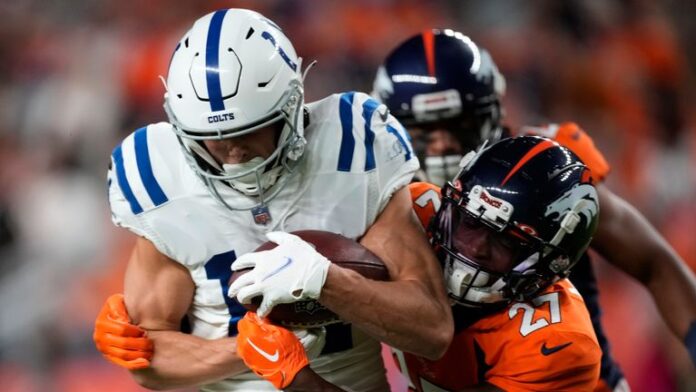 Colts @ Broncos the first game in NFL history to pit two QBs together with at least four Pro Bowls each, but to feature zero TDs; watch the NFL live on Sky Sports on Sundays at 6pm – Week Five triple-header kicks off with Dolphins @ Jets, followed by Cowboys @ Rams and Bengals @ Ravens

Stephon Gilmore batted away Russell Wilson’s pass to Courtland Sutton in the endzone on fourth-and-1 from the five-yard line to secure a hard-fought 12-9 overtime win for the Indianapolis Colts over the Denver Broncos on Thursday night.

In a low-scoring contest in which both offenses showed why they’re currently ranked last (Colts) and third-last (Broncos) in the NFL in scoring, Chase McLauglin’s four field goals – including a game-winning 48-yarder in OT – ultimately proved the difference.

Gilmore also intercepted a Wilson pass in the fourth quarter – on third-and-4 from the 13-yard line, intended for Jerry Jeudy in the endzone – to help set up McLauglin’s game-tying field goal from 31 yards with five seconds left.

The Colts won the overtime coin toss and Ryan drove them into field-goal range again, but Wilson had the chance to win the game for the Broncos with a TD on the subsequent drive, only for Gilmore to again come up with the crucial intervention – this time the veteran cornerback batting his pass away.

It’s the first game in NFL history that pitted two quarterbacks together with at least four Pro Bowl appearances each, but to feature zero touchdowns.

Matt Ryan was 26 of 41 passing, for 251 yards, as he grinded out the victory for the Colts (2-2-1) despite throwing two interceptions into the hands of safety Caden Sterns, fumbling for the 10th time this season and getting sacked six times, taking him to 21 on the year so far.

Russell Wilson went 21-for-39, for 274 yards and two interceptions as the Broncos (2-3) lost a second straight. Brandon McManus kicked three field goals for the team, giving the hosts a 6-0 lead at one stage in the second quarter, but he also crucially had a 34-yarder blocked early in the second half.

What they said… ‘It was a slog of a game’

Colts quarterback, Matt Ryan: “It was just kind of a slog of a game. We need to play better for sure, but I’m proud of the guys. Wins are what we need.

“We’re right in the mix… I thought the two drives at the end showed a lot of guts. You just keep battling – and it helps that our defense played lights out.”

Broncos quarterback, Russell Wilson: “It’s very simple: at the end of the day, I’ve got to be better.

“I’ve got to play better. I let the team down tonight. One thing I know about myself, is I’m going to respond.”

Can the Dallas Cowboys (3-1) add to their three-game win streak as they visit the defending Super Bowl-champion Los Angeles Rams (2-2) as part of the NFL Sunday double-header live on Sky Sports in Week Five.

The Cowboys (3-1) face a Rams (2-2) outfit looking to address an inconsistent start to their title defence and eager to bounce back from a defeat to their NFC West rivals, the San Francisco 49ers, on Monday night. The action in Los Angeles gets under way at 9.25pm, Sunday, live on Sky Sports NFL.

Prior to that, the NFL Sunday triple-header kicks off with a division rivalry battle between the Miami Dolphins (3-1) and New York Jets (2-2) in the AFC East – kick-off, 6pm.

Rounding off the Sunday night action, we join our friends at NBC for Football Night in America and Sunday Night Football for an AFC North battle between the Baltimore Ravens (2-2) and Cincinnati Bengals (2-2), with the defending AFC conference champs welcoming Lamar Jackson and co into their building – kick-off is at 1.20am, early on Monday morning.