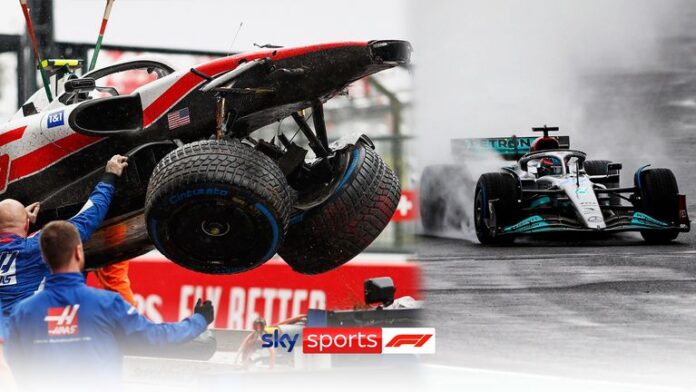 Mercedes, who are without a race win this season, appeared to be in a class of their own as Russell’s 1:41.935 put him two tenths clear of Hamilton.

Max Verstappen, who can clinch a second world championship this weekend by winning the race with a fastest lap, was a further six tenths back as he edged out Red Bull team-mate Sergio Perez for third.

Charles Leclerc finished 11th after enduring a challenging session, which began with the Ferrari narrowly escaping a collision with the barrier as he went off track at Turn 11.

The Monegasque then missed a chunk of the session as Ferrari fixed a brake issue, but he would report afterwards that his car still felt “really bad”.

Kevin Magnussen took an impressive fifth for Haas, beating Ferrari’s Carlos Sainz, while Fernando Alonso was seventh after having topped the timesheet in Practice One.

Mick Schumacher, who is fighting to keep his seat with Haas for next season, was absent from second practice after damaging his car in a crash in the opening session.

“It’s probably not going to be that representative for this weekend but it’s definitely good learning for the future,” Russell said.

“There’s a chance on Sunday it could be wet, but it looks pretty dry tomorrow, nevertheless it’s always nice to end the day top of the timesheet. We definitely made some improvements from FP1 as we were at the bottom of the timesheets.”

As had been the case in Friday’s opening session, running began on wet tyres as rain fell in Suzuka, but conditions eased sufficiently for a switch to be made to intermediate tyres.

An additional 30 minutes added to the session – making it 90 minutes in total – had been intended to be used to test Pirelli’s tyres for next season, but the wet conditions meant the test was cancelled.

The extra running time ultimately allowed some teams extra time to gather information in the wet, but several drivers stuck to standard running plans and did not take to the track during the additional period.

While there is a possibility of rain falling during Sunday’s race, dry conditions are expected for qualifying, meaning the first opportunity for dry running in Saturday’s final practice will provide a crucial indicator as to who is likely to seal pole.