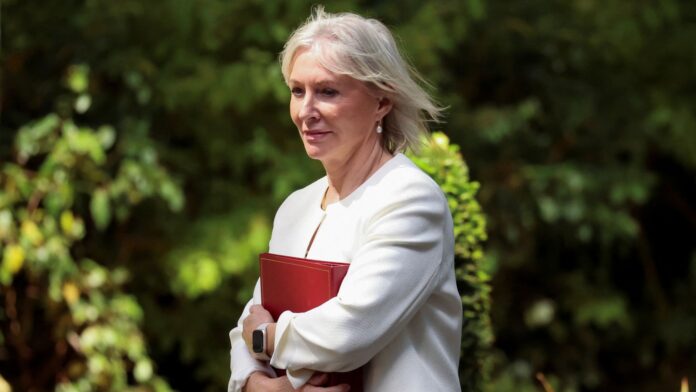 The culture secretary has told Sky News that the BBC is a “national asset”, that she’s “working very closely” with Channel 4 to decide whether it should be sold off or not and that she’d be “too hangry” to follow Matt Hancock into the I’m A Celebrity jungle.

For Michelle Donelan as the 11th Tory secretary for digital, culture, media and sport in 12 years, taking on the role at a crucial time for public sector broadcasters, there is a lot of work to do.

Sky News was given exclusive access to film Ms Donelan as she went to see construction work under way at Shepperton Studios in Surrey, which, once completed, will be the second-biggest film and TV studio in the world.

A consequence of long-term leases signed with both Netflix and Prime Video, Britain’s billion-pound film industry is thriving.

It’s our public sector broadcasters that are desperate for some clarity on where they stand from the government.

If culture and the arts were, at times, casualties of an ideological war under Nadine Dorries, Ms Donelan’s predecessor, perhaps now the economic importance of cementing good relationships is coming to the fore.

Ms Donelan sets a markedly different tone to Ms Dorries when it comes to the future of the BBC licence fee, saying: “I think the BBC is a fantastic institution… we do need to make them sustainable in the long-term.

“It’s a national asset, we need to inject fairness and choice into the system that we pick, but we will make any decisions informed by evidence.”

The decision on whether plans to privatise Channel 4 might be ditched are expected in the upcoming media bill, which is looking at updating broadcasting law for the digital age.

“I’m working very closely with Channel 4 on this,” Ms Donelan said. “But we’ve been absolutely clear that we’re reviewing the business case, and that was one of my priorities when I entered the department, to make sure that we get this right.”

Before that, there’s the Online Safety Bill, due back before parliament at the beginning of December, but with amendments expected. It takes a “common-sense approach” to what’s deemed to be harmful, she says.

“The tack that I have taken is to make sure that we do protect children, we safeguard them, we actually strengthen those aspects of the bill.

“Illegal content is, of course, removed, we’re increasing the transparency and accountability on social media platforms, but we’re also rebalancing some of that freedom of choice for adults.

“And you’ll see the specific changes in the direction of travel.”

And for those keen to know the culture secretary’s arts and sports credentials, when it comes to football she is a Leeds supporter, she likes listening to Taylor Swift, has just finished watching Dead To Me on Netflix, and, no – would never “do a Matt Hancock” and go on I’m a Celebrity… Get Me Out Of Here!

“I definitely wouldn’t consider doing it because I’m a bit of a wuss when it comes to eating bugs and I get a bit hangry so it might not be appropriate for me.”

And then she adds, in a subtle swipe: “Look, every politician is their own person. He made a decision to go on this show.

“Obviously it’s not a decision I would make because I want to focus on my constituents and being as accessible as possible, but look, that’s up to him.”