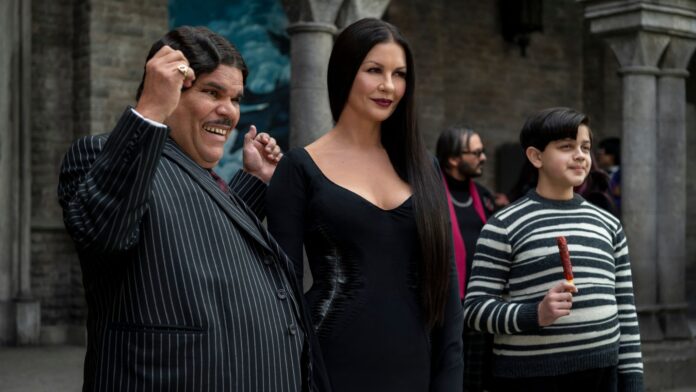 In 1938, The New Yorker magazine published a one-panel comic by cartoonist Charles Addams, starring a tall, gaunt woman, and a sturdy butler.

The image shows a man trying to sell the unimpressed looking pair a vacuum cleaner for their creaking, dusty home.

It was the first appearance of the characters who became known as The Addams Family, a macabre and wealthy bunch who delight in the bizarre, and whose members are known for their distinct looks and personalities.

Since that first cartoon in 1938, The Addams Family has featured in at least five films, six television series and specials, and is often credited as a major inspiration for goth subculture.

Netflix’s latest series, Wednesday, follows the character as she heads to a new school, with the titular role played by 20-year-old Jenna Ortega. In recent years, Ortega has become part of a new generation of female horror stars, after taking roles in the fifth Scream film, and Ti West’s slasher series X.

She told Sky News’ film and TV podcast Backstage that she felt pressure taking on the role because of the nostalgia many have for the ’90s films.

“It’s still the way that a lot of people are being introduced to The Addams Family, and it definitely made its mark on the character and in everything that she is. I think people expect something from her now that wasn’t expected from her,” she said.

“I’ve never played such an iconic character who’s someone that I grew up respecting so much.

“So I think, when you respect someone so much, you just want to do right by them and right by everybody else who fell in love with her for a very good reason.”

Christina Ricci previously played Wednesday Addams in the 1991 and 1993 films – and, in the early ’10s, memes of her witty delivery in the role saturated the social media site Tumblr.

The cast were also so popular that they were asked to record extra lines of dialogue for a pinball machine based on the 1991 movie which – for the trivia fans among you – became best-selling pinball game of all time.

An exciting moment, then, when Ricci appeared on set – albeit playing a completely different character.

“It was interesting for sure, especially because I know that people are automatically making the comparison. But I think what kind of put me at ease was how cool and respectful and how generous of an actress she is,” Ortega said.

The amplified gothic nature of The Addams Family lends itself well to the aesthetic of Tim Burton, one of the show’s executive producers, and director of the first four episodes of the series.

Gwendoline Christie, who plays Wednesday’s headteacher Larissa Weems, says she was thrilled to work alongside the award-winning director.

“I wanted to work with Tim Burton for the whole of my life and I really loved his films growing up. I adored them. They spoke to me, you know, they really they made me feel like there was a place for me in the world.

“But also that there was someone else that viewed the world as I did, a world that was more heightened than our own, more stylised, often more beautiful, actually, and certainly more sensitive to the darker elements.”

The actor is no stranger to ensemble casts – Christie is a Game Of Thrones alumna – but she has particularly high praise for castmate Ortega.

“[She] is an exemplary actor and has done such an extraordinary job of bringing this character to life. She’s so dedicated to the work, and she’s also a deeply sweet and just divine person.”

Wednesday is available now on Netflix. You can listen our review of the show on this week’s Backstage podcast – subscribe for free wherever you get your podcasts.

Road to the Grammys: Steve Lacy on “Bad Habit,” collaboration