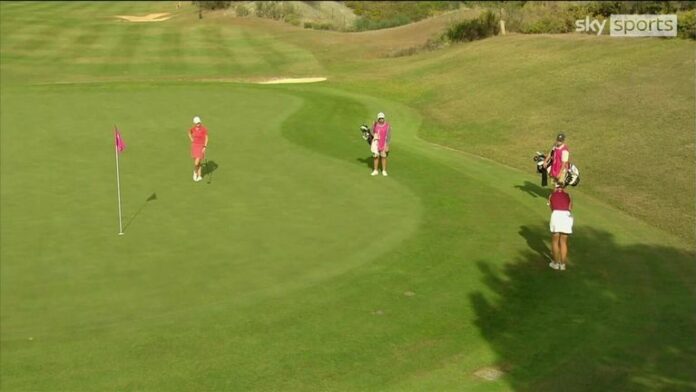 Linn Grant came third at the Andalucia Costa del Sol Open de Espana on Sunday but it was enough to see her win the Race to Costa Del Sol title.

Grant had needed a good final day of 65 (-8) to secure third place on 17-under-par at the Alferini Golf Course in Malaga.

Ireland’s Leona Maguire, who started the final round tied for the lead, carded a 69 to finish fourth on 16 under, with Alice Hewson of England ending in a tie for fifth.

“It was very exciting,” she said. “I came off yesterday quite frustrated, so it was nice to play a solid round today and I didn’t really think about it much until the 17th when I happened to eagle.

“I’m happy with my round and the tournament.”

She finished the event one stroke behind compatriot Hedwall, who tied on 18-under-par with Switzerland’s Metraux after regulation play.

Hedwall and Metraux played the 18th hole three times before moving onto to the 17th in the playoff. Hedwall then birdied the par-five hole to take the title.

“It just feels awesome, it feels forever that I have waited for that win,” she said. “I wasn’t sure I still had it in me. It’s so nice to get it together and get this win.

“I have been hitting my driver really well the last couple of weeks and I could take advantage of the par-fives here and reach and two-putt for birdies and even make a couple of eagles. It’s been great, I have really enjoyed playing this golf course, it was a lot of fun.

“I wasn’t sure I still had it in me, and I think I just showed myself I can, and the 2023 Solheim Cup will be a goal for next season.“

Grant had gone into this tournament locked in a battle with Maja Stark to decide the Ladies European Tour No 1. Grant came through with Stark finishing on 13 under, four strokes behind.

“This is huge for Swedish golf,” Grant concluded.

“I’ve had Carro [Hedwall] as a role model myself to just see her out there winning and getting that moment for herself is awesome as well.