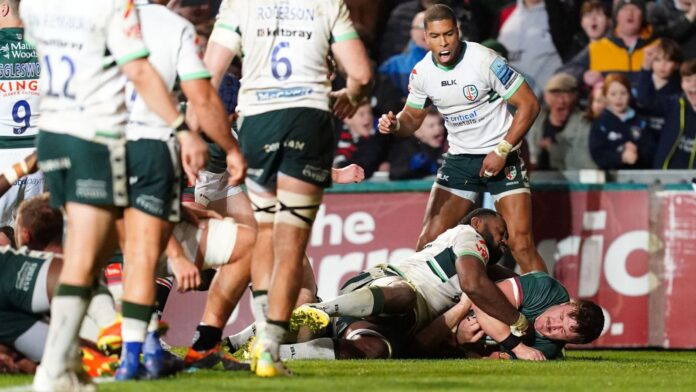 Leicester Tigers are up to fifth in the Premiership; while London Irish collected two bonus points to move to within two points of Bristol Bears at the bottom of the table

Leicester head coach Steve Borthwick paid tribute to the efforts of London Irish after the Gallagher Premiership’s bottom club made Tigers fight all the way for a 33-31 win at Mattioli Woods Welford Road.

Leicester looked firmly in control when they secured a bonus point before half-time, but a spirited comeback from their opponents saw the hosts hanging on at the death for a victory which saw them move up to fifth in the table.

Borthwick said: “All credit to London Irish for taking their opportunities as they were brilliant with their athleticism and dynamism.

“They are expert at the back of the line-out with their strikes and are one of the best sides at the breakdown.

“We gave them too many opportunities by making too many errors by conceding penalties and turning the ball over regularly.

“However, I was pleased with our resilience as we found a way to close the game out. It’s been a strange season as we haven’t played here for 50 days, but we’ve picked up excellent wins at Saints and Quins.

“We will have a couple more of our players back next week, so hopefully our squad will slowly build.”

Despite losing for the seventh time in eight league fixtures, Irish director of rugby Declan Kidney was buoyed by his side’s resilience to come back and secure two valuable points.

“We gave away too many points in that first half and we had to come back from a big hole,” he said.

“We are not far away from winning games as we’ve had six games away in our eight fixtures and it’s only at Sale that we didn’t perform. We’ve picked up five points in our last four away games.

“So we are knocking on the door, but we need to put together a full 80-minute performance and then the results will come.

“We made too many errors early on, but after that it was nip and tuck and we were unlucky not to go away with more than two points.

“There were tough marginal calls in the game, but I’m more concerned about dealing with our poor start, but we showed once again we never give in, which is something you can’t coach.

“I’d gladly take a 3-0 win and although we will never celebrate a loss, we secured a handy two points today.”

‘We’ve been praying for you’: Kate and Rio Ferdinand expecting second...