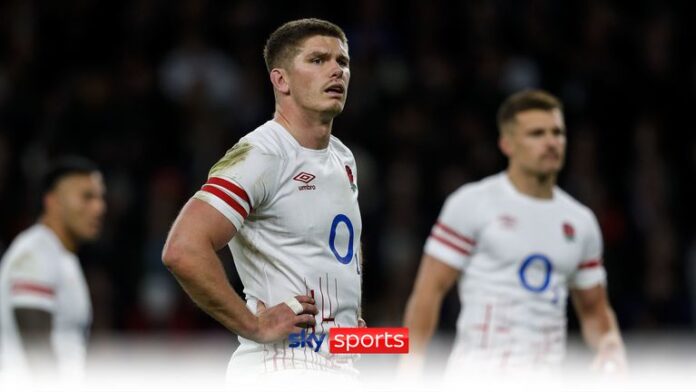 England finished their autumn series by losing 27-13 to 14-man South Africa; Eddie Jones said he ‘doesn’t care what people think’ after his side posted a seventh Test without victory this calendar year

Eddie Jones has been told that England’s performance this autumn has fallen below expectations as the head coach accepts he faces an “uncomfortable” review.

Over the next fortnight the Rugby Football Union is to investigate a dismal campaign that reached its nadir with Saturday’s conclusive 27-13 defeat by South Africa, who claimed a first win at Twickenham since 2014.

A rout that was greeted with boos at the final whistle completed England’s worst year since 2008, comprising of six losses, five wins and a draw.

It places Jones’ future back in doubt with the review panel to examine “how improvements can be made ahead of the Six Nations” amid an acknowledgement from the RFU that the team have underperformed.

“We would like to thank England fans for their patience and support, it matters to us how they feel,” chief executive Bill Sweeney said.

“Like them we are really disappointed with the results of the Autumn Nations Series.

“Despite strong individual performances and some great new talent coming into the team, the overall results are not where we expect them to be.”

On top of explaining why England barely fired a shot against the Springboks, Jones must also account for a first defeat by Argentina since 2008 and a 25-25 draw with New Zealand that was made possible by a dramatic late comeback.

The only success this month was against a disappointing Japan, who were put to the sword 52-13.

“I’m sure the fans have doubts and feel that I don’t know how to coach, but it’s a progression to the World Cup and we have our ups and downs.

“We want to be stronger in the Six Nations and put ourselves in the position where we’re fourth or fifth going into the World Cup, ready to go.

“I’ve got a plan for how England can win the World Cup, but it doesn’t go in a perfect line.

“Sometimes you need these games to make you understand the areas which need to be bolstered.

“We’re not off track. You have days like against South Africa. I’ve had worse days than that.

“We felt really confident going into the game. We knew where South Africa were coming, but on the day we weren’t good enough to win those areas.”

Jones blamed the Springboks defeat on his side’s scrummaging issues, adding that he has “grave concerns about how the scrum was refereed”, without expanding on what those were.

Since 2019 the RFU has conducted a review after every block of fixtures but declined to reveal who sits on the panel beyond that it includes “board and executive members along with independent, former players and coaches”.

However, in a departure from the unequivocal backing offered to Jones when the 2022 Six Nations ended in three defeats for the third time in five years, there was no mention of support for England’s head coach this time.

While he faces renewed scrutiny, Jones has been well backed by Sweeney in the past and is not expected to be sacked.

His eight-year reign ends after the 2023 World Cup with the RFU hoping to name his successor in May having reportedly drawn up a three-strong shortlist consisting of Steve Borthwick, Ronan O’Gara and Scott Robertson.

Sir Clive Woodward has led the criticism following the crushing defeat by South Africa, declaring that the result completed the “worst week in English rugby history” and that the game in this country is a “total shambles”.