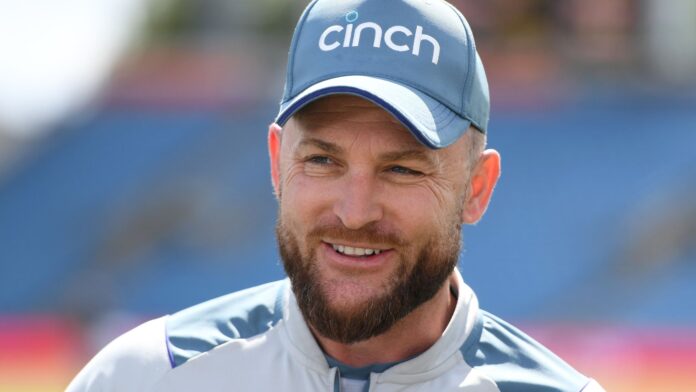 England head coach Brendon McCullum says his side will not deviate from their “aggressive” style of cricket as they aim for a Test series win in Pakistan.

England won six of seven Tests during the home summer after McCullum became head coach and Ben Stokes captain, with the positive ethos the side played with, dubbed ‘Bazball’, garnering victories over New Zealand, India and South Africa.

McCullum is unsure how that brand of cricket will fare in Pakistan, where England are touring in red-ball cricket for the first time since 2005, but insists there will be no place for timidity, saying his side have an “obligation to entertain”.

The three-Test series is live on Sky Sports, with the opening game in Rawalpindi starting on Thursday (4.30am on Sky Sports Cricket ahead of the first ball at 5am).

“We are looking forward to coming over here and playing an entertaining style of cricket which hopefully ends up in results, whether that’s in our favour or in Pakistan’s favour,” McCullum told reporters on Monday.

“We want to try and entertain people. Test cricket has not always been as popular as it used to be so we see an obligation to try and ensure people come away entertained. We’ve got an opportunity to do what we do best and exhibit our skills on the field.

“That style is not always going to be successful but we have seen that it can unlock your skill. In this game we can suffocate ourselves with the will for results and stymie the ability for talent to come out.

“We believe trying to put a positive, aggressive slant on it allows the talent to come out. We have had some success in recent history. It remains to be seen how it will go on the road.

“We will certainly respect the conditions but if we are given an opportunity to play aggressive and attacking cricket we will try and take that option.

“We know it may not necessarily be that the aggressive cricket is as prominent as in the past but there will be opportunities to play positively.

“It’s authentic to the line-up we have, that’s what gives the players the most amount of freedom and the best opportunity to perform at the highest level.”

England have lost their last three away Test series, beaten 3-1 in India in early 2021 before being thrashed 4-0 in the 2021/22 Ashes and then losing 1-0 to West Indies in March of this year.

McCullum added: “To win away from home is the greatest accomplishment you can achieve as a Test player and side. We understand the size of the challenge ahead of us but that’s why you want to play the game.

“You don’t want easy challenges, you want to take on the best in their own conditions to test where you are at.

The boys have already said they’re pretty excited about playing in front of a full house here, it’s going to be a good atmosphere, so they’re really excited. That’s what we want from red-ball cricket all around the world: stadiums packed out and fans getting behind their local team.

‘If we get outplayed, that’s okay’

“I don’t know if we are going to win the series but we will certainly be pushing for results. If we get beat, we know Pakistan will have played well.

“I expect us to play well but If we get outplayed, that’s okay. Hopefully in a few weeks’ time, everyone walks away saying it was an amazing series.

“This is a great place to tour and it has been starved of international cricket for a long period of time. We understand how passionate people are here in Pakistan about cricket and we understand the obligation that we have as an England side.

“[Stokes] wants [England’s players] to be rockstars and to be a rockstar you’ve got to play in front of the big houses.”

One of the things we have talked about is adapting to whatever we have been given, not getting too stuck in our preconceived thoughts. Hopefully if we are brave enough in the big moments we will come out with more runs than them.

Fast bowler Mark Wood – who will miss the opening Test with a hip injury – all-rounder Liam Livingstone, middle-order batter Harry Brook and captain Stokes have linked up with the Test team having been part of the triumphant T20 World Cup-winning squad in Australia.

McCullum said: “A few guys were part of the World Cup win and have come here with beaming smiles. They have a strut in their step which is fantastic.

“It’s never easy to win World Cups and England did fantastic to win that World Cup. There is a lot of confidence from that and it is great on the back of what we achieved in the Test summer.”

Watch England’s three-Test series in Pakistan live on Sky Sports Cricket. Coverage of the opening game begins at 4.30am on Thursday ahead of a 5am start in Rawalpindi.