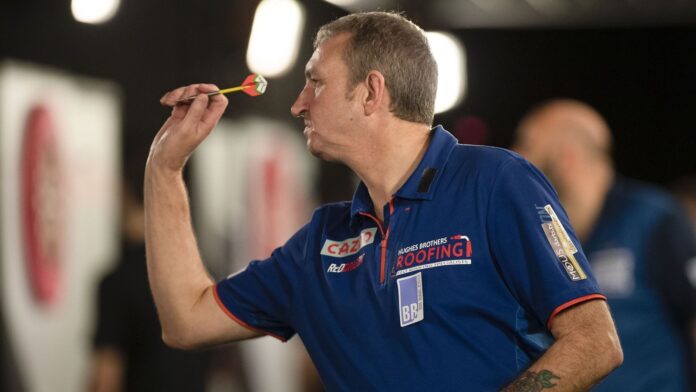 Former Lakeside champion Richie Burnett will make his first appearance since 2014 after qualifying; Glen Durrant tweeted he is ‘no longer a pro player’ after losing in Barnsley; watch the 2023 PDC World Darts Championship live on Sky Sports from December 15 to January 3

Monday’s qualifier at the Barnsley Metrodome offered a last chance for PDC Tour Card Holders to book their place at Alexandra Palace for the sport’s showpiece event, which will take place from December 15 to January 3.

Former Lakeside champion Burnett will make his first World Championship appearance since 2014 after defeating David Evans 7-3 in their decisive board final.

Durrant, a three-time Lakeside world champion and winner of Premier League Darts in 2020, subsequently took to social media to announce his intention to step away from the professional game next year with the aim of returning to Q School in 2024.

“I’ve not retired, just no longer a pro player; 2023 is a year of new adventures and finding that winning feeling again.

Burnett, who was also a World Matchplay runner-up in 2001, kicked off his campaign with wins over former World Youth champion Bradley Brooks and Northern Ireland’s Kevin Burness.

The 55-year-old Welshman then produced the performance of the day in his 6-3 success against Brian Raman, posting a sensational 110 average to prevail in a high-quality encounter.

Joyce also saw off Max Hopp, Gordon Mathers and Rusty-Jake Rodriguez en route to qualification, defying a ton-plus average from the Austrian in round two.

Canadian player Smith completed the 96-player field for next month’s event, courtesy of a comprehensive 7-1 victory against Nick Fullwell in their decider.

Smith whitewashed Darren Webster and edged out Jack Main and Steve Lennon in deciding-leg tussles, securing a place in his fifth World Championship and preserving his hopes of retaining his PDC Tour Card.

Three spots were available at the qualifier after Josh Rock – a ProTour Order of Merit qualifier – won Sunday’s Winmau World Youth Championship final, averaging 104 in his 6-1 success against Nathan Girvan.

Meanwhile, Burness landed a nine-darter in his opening round win over Andy Boulton, only to succumb to Burnett in the last 24.

The draw for the World Darts Championship will be made from 6.25pm on Monday, live on Sky Sports News in the UK.