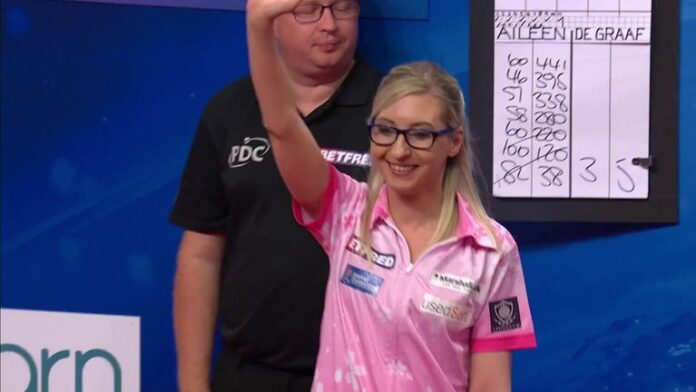 Fallon Sherrock thought she had missed out on her chance to qualify for the PDC World Championship after Lisa Ashton and Beau Greaves finished ahead of her in the Women’s Series Order of Merit; the inaugural Women’s World Matchplay champion will now be at Alexandra Palace though

Fallon Sherrock went from devastation to elation after finding out she would be competing at this year’s Cazoo World Darts Championship.

The 28-year-old thought her chance of returning to Alexandra Palace, where she wrote her name in history with wins over Ted Evetts and Mensur Suljovic in 2019, had gone after missing out to Lisa Ashton and Beau Greaves in the PDC Women’s Series.

But the decision to grant Sherrock a place in the PDC’s showpiece tournament, live on Sky Sports from December 15 to January 3, for winning the inaugural Women’s World Matchplay earlier this year has given the Milton Keynes thrower an unexpected opportunity to take to the big stage again.

“I was gobsmacked,” Sherrock, who was edged out 3-2 by Steve Beaton in the first round in 2021, told Sky Sports about her reaction when the news was confirmed. “I was like ‘really?!’ because when I thought I’d missed out I was so devastated and low.

“Then to get told I was in I was so shocked, and then it was excitement and buzzing. I can’t put into words how excited I was.

“I’m so excited to get back there, hear the crowd again, feel the electric atmosphere and do something better than last year because I want that run from my first year again. Going out first round last year was so devastating, so I’m more game for it and I’ve got more of a hunger this year.

“I’m never going to go up there and not believe in my ability. I do think I can go on a run again, if not go further.”

Sherrock defeated Aileen de Graaf 6-3 to clinch the Matchplay title at the Winter Gardens in Blackpool back in July, although at the time it was not known the winner would be granted a World Championship place.

The announcement that Sherrock and all future winners of the event will qualify for the end-of-year extravaganza at Alexandra Palace came earlier this month, and Sherrock believes the tournament’s status merits World Championship inclusion.

“It’s bringing more women into the game and this year we’ll see three women at Ally Pally, so it’s only going to push the game further.

“I’ve stayed off social media and not really listened to any of the comments because people will have their own opinion. I could be the best player in the world, and I’d still get hate or the worst player and still get hate.

“It’s one of those where I still think, because I won the Matchplay, it’s entitled to a spot because it is a title.”

Sherrock has been drawn to face Ricky Evans in round one of the World Championship, with the winner going through to face Joe Cullen in the last 64.

Ashton, a four-time Lakeside Women’s World Champion, has a second-round showdown with five-time world champion and Dutch darting icon Raymond van Barneveld to look forward to if she can overcome Ryan Meikle.

Meanwhile, debutant Greaves faces Ireland’s William O’Connor for the right to take on No 25 seed Gabriel Clemens in round two and Sherrock is excited to see how the 18-year-old from Doncaster performs as opportunities continue to increase for women in the PDC.

“We’ve got more competitions and more opportunities coming up, and more money in the game. The more us women go to these events and qualify for the Worlds will only increase the opportunities we’re going to get.

“Beau is a really good player; she’s an asset to our sport and it will be really exciting to see how she performs at Ally Pally. Being only 18, she’s got a whole lifetime to progress in the game and I’m excited to see how she gets on.

“[I’d advise her] just enjoy it and run with the adrenaline, and any negativity you get, just ignore it.”