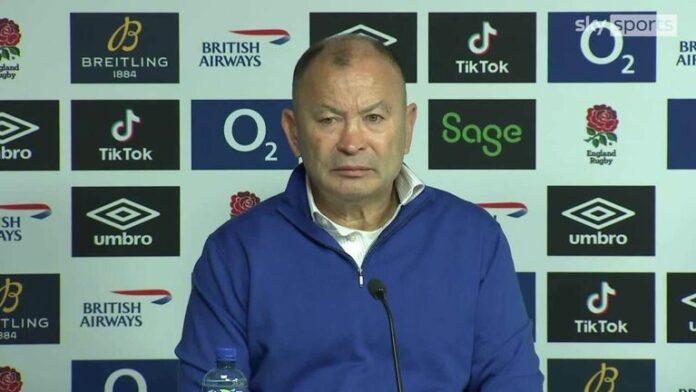 We review the latest autumn Test window, with Eddie Jones’ England floundering, Wayne Pivac seemingly on his way out of Wales and Andy Farrell’s Ireland building…

For all of England head coach Jones’ statements that his side are building towards next autumn’s 2023 Rugby World Cup in France, rounding off 2022 with such a meek defeat at home to a 14-man South Africa was never something that was going to pass by unnoticed.

With the loss came confirmation England had endured their worst calendar year for 12 years dating back to 2008, as they posted a losing Test record for the first time since that year too: six losses, one draw, five wins.

One more defeat can be added to that rotten record in the shape of England’s embarrassing 52-21 loss to a 14-man Barbarians side at Twickenham in June as well.

This autumn, aside from defeat to the Springboks, England suffered a first loss to Argentina at Twickenham for 16 years (and anywhere for 13 years), beat Japan, and conjured up a 25-25 draw with New Zealand from a position of 25-6 behind going into the final 10 minutes.

As sensational as that comeback was, though, reviewing the full Test reveals England’s performance was as poor as in the South Africa game, with their incredible three-try-salvo late on papering over all manner of cracks.

It leaves Jones and co to look back over a month in which there are very little positives, and one which has prompted another RFU review.

In the aftermath of England’s defeat to South Africa in the 2019 Rugby World Cup final in Japan, the RFU set up an anonymous review panel, which has twice before been called upon to hold a series of meetings post-Test windows.

Jones survived to remain in post on both occasions, and the likelihood is that he will do so again this time, with the World Cup less than 10 months away and the RFU seemingly reticent to change things.

England are performing so poorly, however, it is hard to foresee any improvement at the next Six Nations. They remain stunted in attack, error-ridden and undisciplined, while their set-piece lacks punch and consistency too.

In truth, they are crying out for a change and new leadership. Jones came in after the disaster that was England’s home 2015 World Cup pool stage exit, and led them to a Grand Slam in 2016 and 3-0 series win in Australia that summer.

Aside from their run to the World Cup final in 2019, though, they have never reached such heights under the Aussie again. 2017 saw sticky performances and a loss to Ireland en route to a title win, while 2018 proved an utter disaster, finishing fifth in the Six Nations after losses to Scotland, France, and Ireland at home, before losing a series in South Africa 2-1.

They threw away a chance to win the 2019 Six Nations after defeat in Cardiff, and rounded it off with a farcical 38-38 draw at home to Scotland after being 31-0 ahead. 2020 saw them completely outplayed by France, while terrible campaigns in 2021 and 2022 have already been discussed.

Were it not for the last World Cup, it is highly likely Jones would not be in position right now. And therein lies the reason Jones continues to mention the next one perhaps. England are floundering under him, though, and it doesn’t seem likely that will change.

Wayne Pivac heading for the exit door at Wales? Gatland to return?

If Jones is a man under pressure, Wales’ Pivac appears a man on the way out, regardless of the fact the World Cup is around the corner.

Since taking charge after Warren Gatland’s departure following the 2019 World Cup, Wales have, by and large, been pretty poor in terms of performances.

His first Six Nations campaign in 2020 saw four defeats from five to Ireland, France, England and Scotland for a hugely disappointing fifth-placed finish – their worst in the championship since 2007, and a first home loss to Scotland since 2002.

November 2020 saw them convincingly beaten away to Ireland and at home to England, before 2021 brought perhaps the strangest and luckiest Six Nations title win in history, as red cards saw them past Ireland and Scotland despite being outplayed, and a poor refereeing display saw them beat England in Cardiff.

November 2021 brought defeats to New Zealand and South Africa, a very fortunate win against Fiji and a last-gasp one-point success over Australia – both victories coming against 14 men after first-half red cards.

The 2022 Six Nations then saw them begin with a heavy defeat to Ireland in Dublin, before losing three of their remaining four Tests too: away to England, home to France and, for the first time in history, an embarrassing loss to Italy at the Principality Stadium.

This autumn saw them ship 55 points to New Zealand – a year on from conceding 54 points to the same opposition in Cardiff – beat Argentina, but then lose to Georgia for the first time in history and close out the month by losing 39-34 to Australia from a position of 21 points ahead, and with the Wallabies injury-ravaged.

After a series of unwanted firsts and terrible results, reports suggest that Pivac is likely to be dismissed within weeks and former coach Gatland could be brought back in.

An ageing squad, which lacks depth, power and quality, the future does not, as yet, look rosy for Wales.

Andy Farrell’s unbeaten Ireland building, but plenty to work on

Unlike counterparts England and Wales, Ireland emerge from the autumn unbeaten and in a largely positive frame of mind, albeit aware there remains plenty to work on.

A victory over World Cup holders South Africa in the first meeting between the sides since 2017 was a superb result and performance, while further victories came against Fiji and Australia.

While the latter two performances were less fluid and solid than the first, head coach Farrell and co will gladly take three wins and an unbeaten autumn, particularly as he managed to build further squad depth, and cope without key men.

Absentees in the centre Robbie Henshaw (injured) and Bundee Aki (suspended) saw Stuart McCloskey get game time, while the absences of lock Iain Henderson and hooker Ronan Kelleher were also dealt with. Conor Murray’s injury at scrum-half saw the electric Craig Casey get in and impress too.

A lack of a clinical edge in the 22 is one visible area to improve, as is consistency at the breakdown. Not the most powerful side in world rugby, Ireland will also have to box clever at times.

Ireland complete 2022 having picked up victories over each of the southern hemisphere’s big three – New Zealand, South Africa, Australia – becoming the first side to do so since Ireland themselves in 2016. No other nation has achieved this since England in 2002/2003.

A Six Nations Triple Crown, a magnificent 2-1 Test series win over the All Blacks in New Zealand, and an unbeaten autumn round off a very successful calendar year for Ireland. Now the task is to maintain it and try to kick on heading to the World Cup.

Townsend left Russell out of his entire training squad for the autumn, in addition to stripping the captaincy from full-back Stuart Hogg.

Those decisions followed a Six Nations where Russell and Hogg were part of a group of six highly-experienced squad members reported to have defied protocol to go out in Edinburgh after Scotland’s Round 4 victory in Rome.

The result of that saw Russell dropped to the bench against Ireland in Round 5, and even with the game going against Scotland, he was not introduced until the final 14 minutes.

Neither Russell nor Hogg toured with Scotland on their three-Test series in Argentina during the summer – a tour which saw Townsend’s side throw the series-deciding third Test away from 15 points ahead, losing 34-31.

Off the back of March’s incident, and a year in 2020 where Russell was omitted from the squad for every Test Scotland played due to a previous fallout regarding alcohol, the Racing 92 fly-half’s Test career appeared over when Townsend left him out this time around.

Yet, an injury to Adam Hastings saw him not just called up, but reinstated straight back into the starting side to face the All Blacks.

Scotland fell to defeat in that game having given a much-changed New Zealand a scare, before they completed their autumn with victory over Argentina in a Test where Russell pulled the strings to most of the positives in the attack.

It leaves Scotland in a situation where they appear to need Russell in the side to pose a threat and perform better, but also in a spot where clearly the relationship between key man and head coach is strained. Will Townsend stick with him?