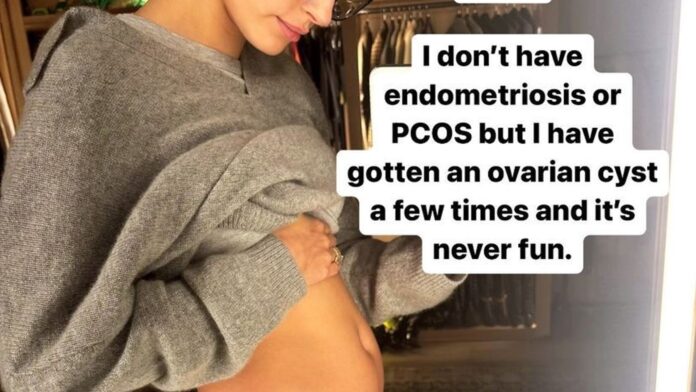 Hailey Bieber has told fans she has an ovarian cyst “the size of an apple”, something she has suffered from before.

The US model, who is married to pop star Justin Bieber, shared a picture on Instagram of herself showing her stomach, pointing out that she is not having a baby.

“I have a cyst on my ovary the size of an apple,” she told her 49.4 million followers. “I don’t have endometriosis or PCOS [polycystic ovary syndrome] but I have gotten an ovarian cyst a few times and it’s never fun.”

Bieber, who is the daughter of actor Stephen Baldwin and niece of Alec Baldwin, captioned her torso: “Not a baby.”

She continued: “It’s painful and achey and makes me feel nauseous and bloated and crampy and emotional.

“Anyways… I’m sure a lot of you can overly relate and understand. We got this.”

The NHS website says ovarian cysts are fluid-filled sacs that are very common and do not usually cause any symptoms. The vast majority are non-cancerous, it says, and most “occur naturally and go away in a few months without needing any treatment”.

Symptoms usually only occur if the cyst ruptures, is very large or blocks the blood supply to the ovaries, the NHS states, in which case the growth may cause pelvic pain, bloating, and heavy or irregular periods.

Both Hailey and Justin Bieber have been open with fans about health concerns, with Hailey telling fans earlier in 2022 how she had suffered from stroke-like symptoms due to a small blood clot on her brain.

In June, Justin revealed he had been diagnosed with a rare condition called Ramsay Hunt syndrome that resulted in complete paralysis of the right side of his face, forcing him to cancel performances.

“It’s pretty serious,” he said at the time. “I wish this wasn’t the case but obviously, my body’s telling me I gotta slow down.”