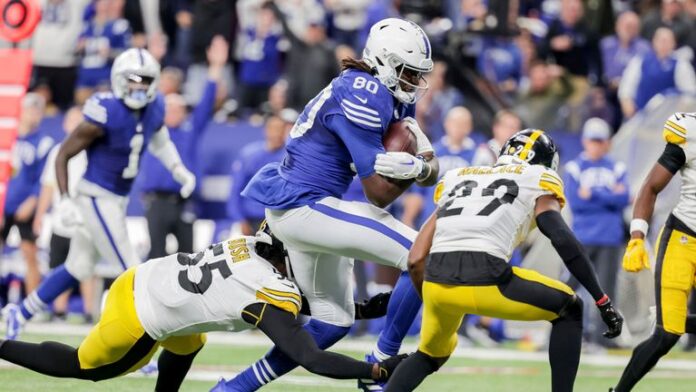 Benny Snell Jr. ran for a team-high 62 yards and a TD on 12 carries, with Steelers starting running back Najee Harris ruled out at half-time with an abdominal injury; watch Thursday Night Football – Bills @ Patriots – live on Sky Sports NFL, 1.15am, Friday

Benny Snell Jr.’s touchdown with just under 10 minutes left gave the Pittsburgh Steelers the lead and the visitors then fended off a last-minute comeback from the Indianapolis Colts to secure a 24-17 win on Monday Night Football.

Getting his first carries of the year, Snell ran for a team-high 62 yards and that score on his 12 carries, after having replaced the injured Najee Harris in the third quarter. The second-year back was ruled out at half-time with an abdominal injury.

Matt Ryan drove the Colts (4-7-1) into position to score, but Indy let a minute run off the clock in a span of three plays in Steelers territory, finally using its first timeout on fourth down with 30 seconds remaining. Ryan then threw incomplete to Parris Campbell on 4th-and-3 from the Steelers 26-yard line. The Colts fall to 1-2 under interim coach Jeff Saturday with the defeat.

In a stodgy first half of the contest, Pittsburgh drove into Indianapolis territory on all five of their possessions, but were limited to field goals on three of those occasions, with a six-yard Harris score midway through the second quarter the only time either team found the end zone before the break.

Trailing 16-3 at half-time, the Colts finally sparked into life when rookie Dallis Flowers returned the opening kick-off of the second half 89 yards. And four plays later, Jonathan Taylor scored on a two-yard run to cut the deficit to 16-10.

The Colts drove to the Pittsburgh one-yard line on their next possession, but Ryan and Taylor botched a hand off and the Steelers defense crucially recovered the football.

Indy then forced a three-and-out and the home side would ultimately find the end zone not long after as Ryan threw a six-yard scoring strike to Michael Pittman to nudge them into a 17-16 lead late in the third quarter.

It didn’t last long. Pittsburgh answered with Snell’s scoring run and a two-point conversion pass from rookie quarterback Kenny Pickett to George Pickens to make it 24-17 – and that’s how it stayed.

It’s the Steelers’ (4-7) eighth-straight victory over Indianapolis, while they also matched the San Francisco 49ers for the most Monday Night Football wins in league history (52) in the process.

Week 13 in the NFL kicks off with a terrific Thursday Night Football showdown between the New England Patriots (6-5) and Buffalo Bills (8-3) at Foxborough, the two rivals battling it out for supremacy in the ultra-competitive AFC East. Watch live on Sky Sports NFL and Main Event from 1.15am on Friday morning.

As for the Steelers, they’re next in action on Sunday as they travel to the Atlanta Falcons (5-7) for a 6pm kick-off, while the Colts are at the Dallas Cowboys (8-3) on Sunday Night Football later that evening, with the action getting under way at 1.20am early on Monday morning.