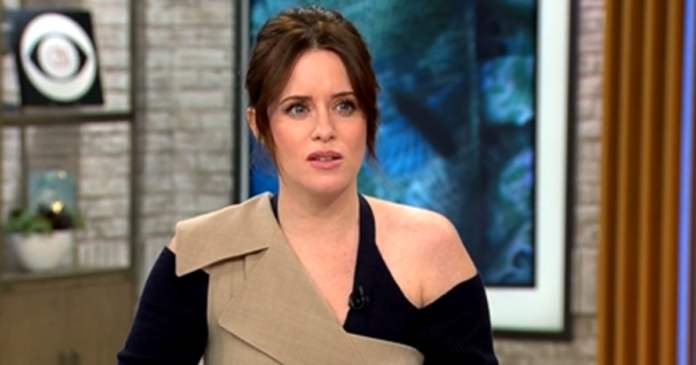 Claire Foy, the British actress best known for her role in “The Crown,” stars in a new film that had a therapist on set as actors and crew grappled with material she said was “very triggering.”

The film, “Women Talking,” follows a group of women inside an ultra-religious Mennonite colony who discover men have been sexually abusing them in their sleep. It is loosely based on true events that took place in Bolivia from 2005 to 2009.

“We all sat around, actually, and talked one day about how the things that we’ve all portrayed in films or in TV shows have been deeply harrowing and quite hard for us to take,” Foy told “CBS Mornings.” But “this is the first time that we’ve ever had someone on set who’s basically safeguarding the actors and making sure they’re OK.”

Foy said there were “lots of moments” where cast and crew members had to take a break, “and it was amazing to be in that kind of supportive environment.”

The film, which was directed by Sarah Polley and has a largely female cast, deals with themes of child abuse and rape. As a mother of a 7-year-old girl, Foy said had to get herself into a frame of mind where she could leave “that” at work and not bring it home.

She also acknowledged that she and others are “just” actors.

“We were portraying something that had actually happened, and I think you’ve just got to have a respect and understanding that you are just an actor portraying something, it’s not really about you feeling it in the moment and taking it too much on yourself,” she said.

Foy said that in playing the role of Salome in the film, she had to put herself in a different frame of mind from when she played Queen Elizabeth II in the first two seasons of “The Crown,” a Netflix drama series based on the British royal family.

“Every character is a leap, really,” Foy said. “I think everything is kind of a leap of faith, and also you get to explore different parts of yourself, and I’ve gotten to do that so often in my career.”

Foy noted that she herself is “very unlike” Queen Elizabeth II — “Personality-wise. Class-wise. Everything.”