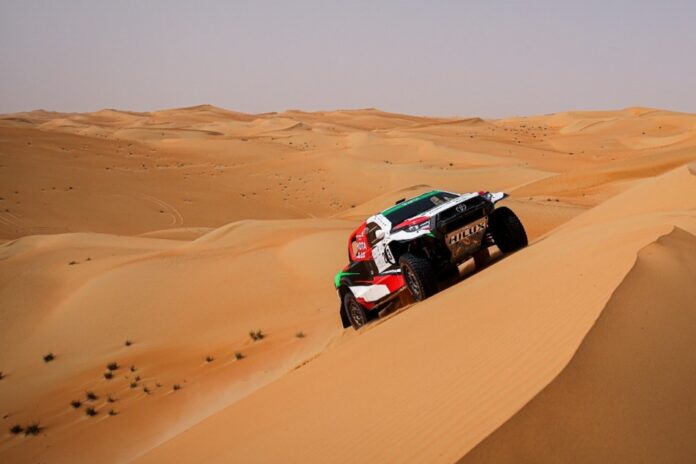 Saudi Arabia’s Yazeed Al-Rajhi takes a 10-point advantage over his closest Czech rival Miroslav Zapletal into this weekend’s Dubai International Baja (December 1-3), the final round of both the FIA World and Midde East Cups for Cross-Country Bajas.

Victory for the Overdrive Racing Toyota Hilux driver and his German navigator Dirk von Zitzewitz would guarantee the FIA World Cup Drivers’ Championship title for the Riyadh man with only Zapletal (Ford F-150) now able to overhaul the winner of the recent Saudi Baja.

Overdrive Racing will also field a pair of non-registered Toyota Hiluxes for Brazil’s Lucas Moraes and Dutchman Erik van Loon. Moraes teams up with former Dakar-winning co-driver Timo Gottschalk for the first time to make final preparations before they enter the Dakar Rally – the opening round of the 2023 FIA World Rally-Raid Championship (W2RC) – together in January.

Spaniard Fernando Alvarez clinched the FIA T3 title in Saudi Arabia recently and the South Racing Can-Am Team driver will confirm third place in the overall championship if he can stay ahead of South Racing team-mates Cristiano de Sousa Batista, Kees Koolen and Meshari Al-Thefiri in the Al Qudra desert.

De Sousa Batista and Al-Thefiri have more important matters to think about on the final round of the FIA World Cup. The Brazilian currently leads the Kuwaiti by one point in the tussle for the FIA T4 Drivers’ Championship and the duo face a winner-takes-all scenario in Dubai.

Should neither of the Can-Am Maverick drivers reach the finish, victory and fastest stage times for third-placed Koolen could give the Dutchman a mathematical chance of snatching the title. Their Spanish team-mate Eduard Pons holds a distant fourth in the T4 battle in another South Racing Can-Am.

Only the Saudi Can-Am driver is able to catch the talented female, while her French co-driver Stéphane Duplé looks to have sealed the Co-drivers’ Championship. He takes a 21-point cushion over fellow countryman Sébastien Delaunay into the season’s finale and his fellow countryman has opted to sit alongside Erik van Loon in a T1 Toyota in Dubai.

Italian female racer Camelia Liparoti (Yamaha YXZ 1000R) arrives in the UAE hoping to defend a 16-point cushion over Lithuanian driver Egidijus Valeiša (SRT Can-Am) in the FIA Middle East T4 title tussle. Liparoti guided her Yamaha to maximum points in Saudi Arabia recently and a finish should be sufficient for her to win the championship.

This year’s Dubai International Baja is based at the Holiday Inn in Dubai Festival City and features a compact two-day format with 390.38 competitive kilometres in a route of 627.65km through the Al Qudra desert.

The opening selective section of 194.40km starts at the small desert township of Al-Lisaili off the Dubai to Al Ain Highway on Friday (December 2) and is split into two parts.

The second 195.98km stage on Saturday (December 3) gets underway at Al Marmoun and finishes at Al-Lisaili, the settlement which is better known in sporting terms as a major hub for camel racing.