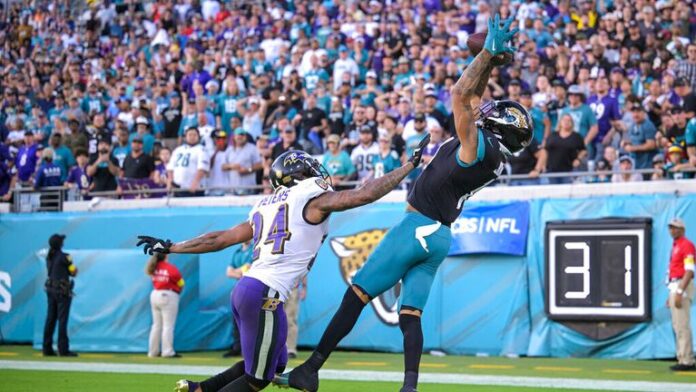 This past week of action featured the Thanksgiving Day triple-header in the NFL, taking us officially into the business end of the 2022 season. It’s big-game football from here on out now until Super Bowl LVII in Arizona on February 12.

So often we see the Cincinnati Bengals have success with their explosive offense – due to Joe Burrow and all of the various weapons he gets to work with – but they won in a very gritty way against the Tennessee Titans on Sunday.

There were still big plays made by Burrow, especially to Tee Higgins in the fourth quarter, but this was a win largely built on the back of the defense.

For them to shut down Derrick Henry the way that they did, I wasn’t expected to see that and it certainly made me sit up and take note.

2) Lawrence comes of age for Jags

Trevor Lawrence has been really good the previous two weeks too, against the Las Vegas Raiders and the Kansas City Chiefs, but I thought the Jacksonville Jaguars quarterback took it to another level again on Sunday against the Baltimore Ravens – particularly in leading that final, game-winning drive.

Lawrence was very calm, and looked everything the Jaguars hoped he would be when they took him with the first overall pick in the 2021 Draft.

He had great numbers – 29 of 37 passing, for 321 yards and three TDs – and that will give him confidence going forward, but the fact his head coach Doug Pederson dialled up a two-point conversion to win it at the end, rather than kick the extra point to tie it, it speaks volumes about his belief in Lawrence.

There’s still a long way to go in his NFL career, but I think this could be a bit of a turning point for the young Jaguars QB.

3) Allen carries Bills on his back

Let’s go back to Thanksgiving Day last week and talk about Josh Allen. He did what he has done so often in Buffalo, which is put the team on his back when it was really needed against quite a dangerous and feisty Detroit Lions team at the moment.

It wasn’t a textbook display from the Bills, nor from Allen really – he had some sloppy moments, including yet another interception down near the goal line – but when they needed him most, he stepped up.

His throw to Stefon Diggs on the final drive was incredible, while he also led the team in rushing on the day. He has firmly kept the Bills in the race to win the AFC East. They have no room for error in that division, so they had to find a way to get that win.

4) White with statement win for Jets

The New York Jets’ quarterback situation is a very interesting one.

Head coach Robert Saleh said the move to bench Zach Wilson for Mike White was made with the intention to get Wilson back in the lineup by the end of the season. That will be tough if White continues to play like he did on Sunday.

White’s three touchdowns, admittedly, did come against a very bad Chicago Bears defense, so it’s hard to judge exactly how well he did, but there’s no doubt the offense looked different, explosive but also simple.

Saleh summed it up best by saying White made the ‘easy look easy’, which hasn’t always been the case with Wilson at the helm. It’s a reminder that being a good quarterback in the NFL is not just about throwing it as hard or as fast as you can, it’s about reading defenses, going through your progressions and making good decisions.

It’s tough to see a road back for Wilson at the moment.

It was very interesting watching Jalen Hurts in the Philadelphia Eagles’ win over the Green Bay Packers on Sunday night. He almost looks like a high school quarterback – and I mean that in a positive way!

Hurts had more rushing attempts than he had completions, albeit he was very efficient as a passer as well. As a defense, you’re on your heels the whole time, because you don’t know how to play him.

He is arguably the most dynamic running quarterback in the NFL at the moment. And the Eagles make every attempt, with designed plays, to get the ball in Hurts’ hands. He is the driving force of that team.

Philadelphia took everything that Green Bay could throw at them and they still won. They’ve certainly shown us they are for real.

Player of the Week: Josh Jacobs

I could have gone with Trevor Lawrence here, given what he did for the Jaguars on such a crucial stage on Sunday, but Josh Jacobs was incredible for the Las Vegas Raiders in their win over the Seattle Seahawks.

He had a run in that game where he literally stiff-armed a 300lbs Seahawks defender and put him on his back. He had 229 total rushing yards and 74 receiving – and won the game on an 86-yard run in overtime!

Jacobs is in a contract year this year, so I expect him to have a very nice offseason payday.

Play of the Week: David Njoku

There were so many great catches this week, but I’m going to go with Cleveland Browns tight end David Njoku’s one-handed grab in the end zone off a pass from Jacoby Brissett.

Given the stage of the game, and how important the win was for the Browns to at least stay semi-alive in the playoff race, it was a test to tremendous concentration and outstanding athleticism.

Coach of the Week: Mike McDaniel

The Miami Dolphins beat the Houston Texans 30-15 on Sunday.

Quarterback Tua Tagovailoa had told the sideline reporter at the game the day before that, last season, he had asked himself in the mirror, “Do I suck?”

He felt pretty low because of the coaching and the lack of support he’d felt he’d had in Miami. He started to doubt himself.

But Mike McDaniel came in this offseason and sent Tua a video containing 700 clips of his best plays, just to show him how good he thought he was, and he has completely turned his fortunes around.

Miami have won eight of nine games he has started this season, with the only loss coming in the game he exited early with concussion.

How much longer will Nathaniel Hackett be the head coach of the Denver Broncos?

Really, this section should cover Russell Wilson’s struggles at quarterback more. He is the team’s most expensive and biggest failing. Take name off the back of the jersey and he looks one of the worst quarterbacks in the NFL right now.

But the Broncos are tied into a contract with Wilson through 2028 – his decline is hugely worrying for them – so what can they do, other than try a different head coach and hope that things change? Hackett’s days are numbered in Denver.